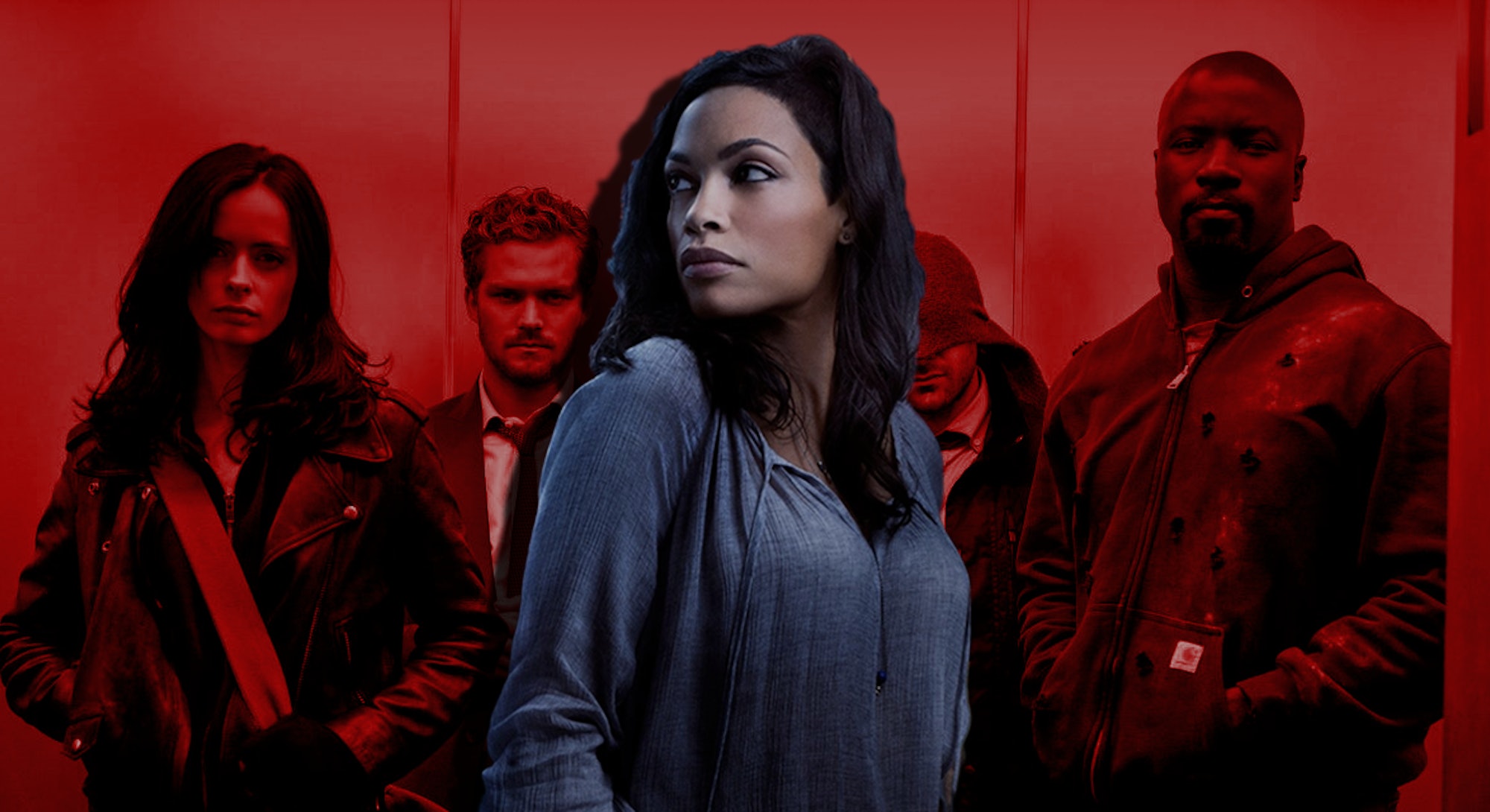 From the moment Rosario Dawson’s Claire Temple dug Matt Murdoch (Charlie Cox) out of the trash, it was clear that Marvel had big plans for her. After all, why cast a powerhouse like Dawson if not to spin out her dazzling turn as the wry, tough, and empathetic Temple across Netflix’s Marvel empire? In the first season of Defenders, which premieres Friday on Netflix, she’s due to cash in on five seasons’ worth of character work and do just that.

Temple kept popping up in the Defenders’ solo shows — Daredevil, Jessica Jones, Luke Cage, and Iron Fist — and with each appearance, her purpose evolved. In the first season of Daredevil, Temple’s path was clear: help Murdoch, who makes everything twice as hard for himself, emotionally and physically. That she happened to fall for him and his pouty mouth felt like a romance that rose from the actors’ natural chemistry (though it does have comics precedence).

After meeting Murdoch, Jessica Jones (Krysten Ritter), Luke Cage (Mike Colter), and Danny Rand (Finn Jones), Temple had bigger things to do than be the love interest who waits, or the plot device that keeps our not-so-street smart heroes moving out in the field.

By the time Iron Fist debuted in this past spring, Temple was in the midst of transformation — and thank god she didn’t have any attractive leading men around to distract her, because she’ll begin her most important turn yet in the story of this fractious non-team of superheroes. A superhuman without superpowers, Temple has the hardest job of all: She must unite the four Defenders, despite their own self-interests, egos, and caustic personalities, which threaten to tear them and New York City apart in the process.

The Girlfriends of Marvel (™) is a highly exclusive club featuring astonishing women — all of whom have their careers and lives together — and the men who can’t function without their support, except when they deem them not useful to matters that are superhero-related.

For example, in Doctor Strange, the 2016 film, Rachel McAdams’ rendition of Night Nurse — the comics character on which Temple is based — merely existed to provide the context and origin around the title character’s petulant angst.

Ant-man’s plot was centered around Wasp (Evangeline Lilly) training an under-qualified man for a job that should rightfully have been hers. Jane Foster (Natalie Portman) is completely out of the picture in the upcoming Thor: Ragnorak; Marvel Studios President Kevin Fiege explained earlier this year that it was because the movie spends very little time on Earth. (However, it’s been rumored that Portman wasn’t happy with the role and lost interest in the direction of the franchise.)

Remember Betty Ross? No one’s even heard from her, since she was played Liv Tyler, in Edward Norton’s The Incredible Hulk, a film that came out in 2008. With the exception of Peggy Carter (Hayley Atwell) , who was blessed with two seasons of character development on TV with Agent Carter, the Girlfriends of Marvel (™) are just that: women who match or outclass their partners in every way — but are mostly utilized for furthering a man’s own story arc.

Temple undoubtedly began her journey in that club. But ya girl Claire knew her worth and broke up with the 🍑-worthy Murdoch at the end the first season of Daredevil. She did get caught up again in Jessica Jones with Luke Cage, and that relationship blossomed in his eponymous series. And can any of us really blame her? The man is literally built to be a thirst trap:

Temple and Cage are slated to uncross their stars in The Defenders, but have the world against them: the baggage of exes, both super-powered and not; the scaled operations of terrorist group The Hand; and at least one immortal soldier, all stand in their way. So with the promise of a thrilling sex scene and the mitigating circumstances already in place for a breakup with Cage, Temple’s due to break the mold that’s shaped so many other female leads in MCU: She can no longer be a Girlfriend of Marvel (™).

One need to look no further than the comments made by the overarching Marvel Netflix villain, Madame Gao (Wai Ching Ho), in Iron Fist, about Temple’s obvious yearning to transform herself:

“You often find yourself fraternizing with people with gifts, you secretly hope that the thing that makes them special will rub off on you.”

While Gao meant this as a dig — Temple was a mere mortal human standing in the midst of a super-powered fight — unifying the Defenders is Temple’s true mission. In Iron Fist, she not only shed herself of distracting romantic entanglements, but also began honing skills that would help her join the fight: She trained with Colleen Wing (Jessica Henwick), found ways to adapt her nursing skills to the field, and traveled abroad on various team missions. Temple’s biggest contribution to the team — her first-hand knowledge about The Hand notwithstanding — was clearing a path for Jessica and Danny to talk about their emotions honestly.

The infamous, and frankly adorable (regardless how one feels about the pairing) take-out scene is the point in the series where Danny and Jessica first acknowledge the compartmentalized romantic dimension of their growing allyship. This spurs a greater collaboration among the entire team. By bringing together people who can help each other, while helping the denizens of New York, Temple defined her role in upcoming Defenders. Like her Avengers counterpart, Agent Coulson (Clark Gregg), Temple’s journey is motivated wanting to help the millions of people in New York, not by a lover who has been “fridged” (written off the show via death or other means to further the hero’s emotional arc).

Judging from The Defenders trailer, a for-real break-up with Luke seems imminent (“How does being Harlem’s Hero allow you to live an actual life?”), which means it’s finally Temple’s time to shine. The true center of Netflix’s The Defenders, Temple’s not merely the connective tissue between our four vigilantes, but the person who reminds them for who and why they fight. After all, two out of four characters — Jones and Rand — are motivated by tragic origin stories, and started their journeys out of personal revenge. The other two — Cage and Murdoch — haven’t proven themselves capable of directing their emotion and abilities productively. Temple is the only woman for the most difficult job in the Defenders: reminding a bunch of destructive assholes they call this beautiful cesspool of city home, just like the millions they’ve been tasked to save.

The Defenders premieres on Netflix Aug 18.*