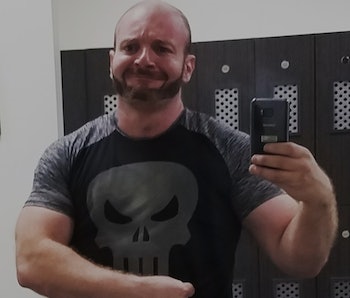 What rights does an American citizen have, if that citizen happens to be a Nazi and a raging, embarrassing idiot? Chris Cantwell, the lumbering small-minded oaf who planned the Charlottesville white supremacist rally and sprayed Vice’s Elle Reeve with toxic nonsense in the documentary Race and Terror, is discovering what the right to free speech actually means.

For instance, Cantwell and his sad buddies are legally entitled to peaceful demonstration, though no one is obligated to give them a platform for their voices. Cantwell is also legally able to tell journalists, as he did in Race and Terror, that he believes President Trump was cucked “by a Jew” when he “allowed” his daughter Ivanka to marry her husband, Jared Kushner. Cantwell can say those things on television. What he can’t really expect is for the world to sit back and do nothing while he peddles his bigotry and douses himself in milk.

When Vice’s documentary went live on Monday, Cantwell became an infamous household name in hours. On Wednesday, he posted a video to his YouTube channel (which has since been removed from the site), telling his followers that a warrant had been placed for his arrest. He teared up, sobbing about how frightened he was that the police were going to apprehend him.

On Thursday, dating site OKCupid announced via Twitter that a user identified Cantwell and reported his profile. Within 10 minutes, as OKCupid describes, Cantwell’s dating profile was removed.

As Gizmodo reports, Cantwell actually wrote an instructional dating post on his blog in 2014. His comments, which he directs at “the ladies”, include “if you aren’t interested in sex, I’m not interested in you” and “your boundaries are complete bullshit”.

Again, racists like Cantwell, who told Vice that he and his buddies would “fucking kill all these people” at the Charlottesville rally if they “needed to”, have an unalienable right to free speech. Cantwell does not evidently have a right to swipe right or left on “the ladies” — at least, not if dating sites have anything to say about it.

See also: Trump supporters will march on Washington the same day as a group of Juggalos