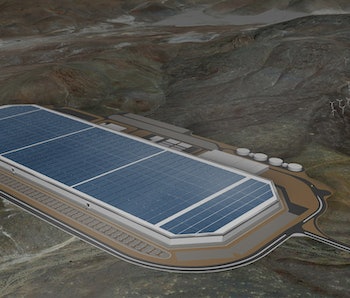 If the future of cars is electric vehicles like the Tesla, then we’re going to need plenty of the lithium that powers their batteries.

The problem is that lithium is a relatively rare element, with China sitting on much of the world’s supply. But recent research suggests the Western United States could be an unexpectedly rich source of lithium, and the scientist behind the finding tells Inverse that this could be great news for Elon Musk’s car company.

The key is supervolcanoes. These massive eruptions kick up elements from deep within the Earth’s mantle, including the otherwise rare lithium. Unlike other elements, lithium doesn’t recombine with other materials as the magma cools, meaning there’s lots of the stuff just waiting to be extracted from these supervolcano remnants, or calderas.

Stanford University researcher Tom Benson tells Inverse about his study of the lithium resources found within the McDermitt caldera, which lies on the state line between Oregon and Nevada.

“Tesla’s new Gigafactory — where they’re building all the batteries and the Panasonic batteries there — that’s right outside of Reno, Nevada,” Benson says. “McDermitt is only a couple hours away from this place. So to have the lithium source so close to the Gigafactory is, potentially for the future of Tesla, it could be a more sustainable option.”

Benson didn’t speculate further on how Tesla might look to make use of this lithium source or others in the region, and the company declined to comment on this story.

But the caldera is already the site of a lithium mining operation, and Benson says he hopes his research will set off further exploration of similar calderas in the Western United States.

“It’s important for countries to have reserves of these resources, especially for rare earths,” he says. He noted the potentially precarious relationship between the United States and China, the world’s leading lithium supplier. Understanding the extent of America’s lithium resources could give the country and domestic businesses a big advantage. “We have the resources here, we have places that we can explore for them. It just makes sense to do that exploration and understand this resource.”

It’s a happy accident of geology that the Tesla Gigafactory’s Nevada home turf is so perfectly suited to the kinds of lithium-rich calderas.

“You can form calderas in a variety of settings, but where you’re going to have the most lithium-enriched magma that leads to these eruptions and these calderas and deposits are going to be where they occur on thick continental crust,” he says. In the United States, the western edge of that thick crust lies around the Nevada and Idaho state lines. “Places throughout the world where there is thick continental crust are very obvious targets for this.”

More like this
Innovation
8.1.2022 11:00 AM
This novel technology could jump-start electric vehicle production
By Molly Glick
Gaming
7.26.2022 1:00 PM
Rollerdrome is the genre mash-up you didn’t know you needed
By Willa Rowe
Entertainment
8.3.2022 4:17 PM
Prey is an old school throwback that brings new life to the Predator series
By Eric Francisco
Related Tags
Share: