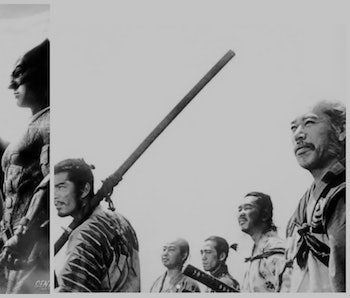 If members of the Justice League were samurais, they might be even more badass than they already are. And with just a few months left until the super-friends team-up in an adventure that pits them against Steppenwolf, a fan-made poster gets fans even more excited than anything officially released by Warner Bros.

Last week, an artist called Sentry Designs revealed a Photoshop job of the Justice League, including Superman, standing in formation akin to Akira Kurosawa’s iconic film Seven Samurai. While Warner Bros. is probably preoccupied with showing the actors and shiny costumes front and center, Sentry Designs’s Kurosawa homage is not only unbelievably good, but thematically perfect.

In 1954’s Seven Samurai, a disparate band of samurai come together to defend a village from raiders in exchange for next to nothing. While the Justice League have the deep pockets of Bruce Wayne, their intentions seem to match those of Kurosawa’s squad of noble samurai.

On top of all that, Aquaman (Jason Mamoa), whose four-pronged Trident supplants a katana, stands in Toshiro Mifune’s place in the poster. In Seven Samurai, Mifune played a hot-headed, overly-passionate warrior, not unlike Mamoa’s Aquaman.