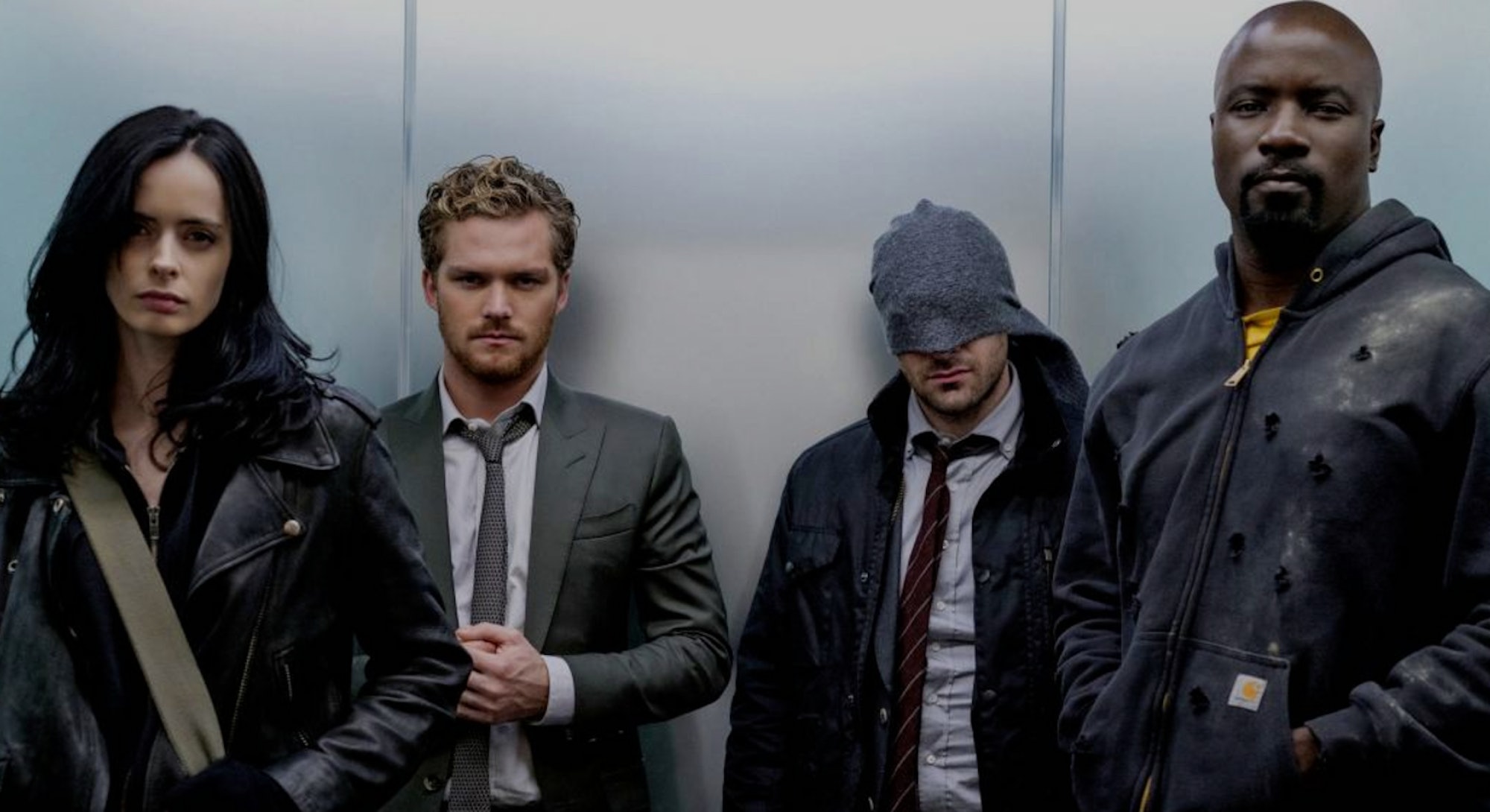 When The Defenders drops on Netflix on August 18, it’ll be an Avengers-style team-up that represents the culmination of 65 episodes featuring New York City’s street-level Marvel heroes. Each season of Daredevil, Jessica Jones, Luke Cage, and Iron Fist has 13 episodes, and The Defenders has only eight. That means that there’s a lot of background and a ton of different characters to keep track of.

Sure, it’s no Infinity War with its sprawling cosmic scope and its 67 characters, each with their own powers and motives, but The Defenders is still a lot. The series sees the disparate efforts of these four characters converge into one centralized plot that pits their new team up against the Hand, who’s seemingly led by Sigourney Weaver’s Alexandra.

Because the conflict in The Defenders exclusively involves the Hand, Alexandra, and a resurrected Elektra as the Black Sky, the previous seasons of Daredevil and Iron Fist take on a greater importance to the central conflict. But due to the nature of the Hand’s overwhelming reach, Luke Cage and Jessica Jones also get involved as Luke looks into the Hand’s influence in Harlem and Jessica investigates a missing architect.

All things considered, here are the most important episodes to watch before The Defenders drops on August 18:

Matt Murdock doesn’t know for a long time what the Hand is up to in New York City, but by Season 2 of Daredevil, it seems like Wilson Fisk has been manipulated as an extension of the shadowy organization. His mentor Sticks, as part of the Chaste, has been at war with the Hand for a long time. And as cool as the Punisher is, he doesn’t have much of a role in The Defenders.

Any episode from Daredevil’s second season that features Elektra is fair game if you’ve got extra time to catch up, as she features prominently into The Defenders as a villain.

In the midst of Matt Murdock trying to track down the uber-secretive Wilson Fisk, the reappearance of his former mentor distracts from the main story arc of Season 1 while hinting at the more important behind-the-scenes maneuvering of the Hand. “Stick” explores important aspects of Matt’s backstory and introduces the enigmatic “Black Sky.” This “human weapon” used by the Hand doesn’t get much clarification until much later in Season 2, but it becomes really important for The Defenders.

Shortly after Wilson Fisk makes his identity public, he forces Matt into a confrontation with Nobu, who before this point was another of the many mysterious political figures working alongside the likes of Fisk and Madame Gao. Nobu trades in his business suit for red ninja attire and a badass Kusari Gama. The brutal confrontation (featured above) nearly kills Matt and it does “kill” Nobu. But we later find out that Nobu is resurrected by the Hand.

Nobu is dead for good by the time The Defenders happens, but “Speak of the Devil” offers insight into just how ancient and powerful the Hand’s reach is.

In the penultimate episode of Daredevil Season 1, Matt takes down one of Madame Gao’s drug operations and even tries to take her on in hand-to-hand combat. Incredibly, the ancient woman is able to hit Matt with some kind of super-powered punch that sends him flying. (This is where we first get hints that Gao might just be more than some very old woman.)

Gao has an important role in Iron Fist and again in The Defenders where she plays second fiddle to Sigourney Weaver’s Alexandra. The Hand’s chain of command becomes clear immediately: Gao’s fearful respect of Alexandra speaks volumes to the importance Sigourney Weaver’s character.

Most of “Semper Fidelis” sees Matt dealing with him being a bad lawyer and a worse friend to Foggy Nelson. As their friendship and law practice crumble, Matt is pulled towards more violent tendencies with Elektra. In the bewildering cliffhanger at the end of the episode, Matt and Elektra find a giant hole in the middle of a construction site that goes impossibly deep.

We never get answers to this “hole mystery” until The Defenders, so be sure to pay attention.

“Guilty as Sin” immediately follows “Semper Fidelis” in what feels like a two-part story. Matt and Elektra are attacked by ninjas from the Hand at that big hole, and Elektra is cut by a poisoned blade.

Thankfully, Stick shows up out of nowhere to assist them and dole out some cryptic prophecies about an important mystical war (one we won’t really understand until Iron Fist). He’s also able to heal Elektra back at Matt’s apartment. After a home invasion, Elektra also proves herself driven by insane bloodlust. This causes Matt to reject her and Elektra to resent Stick.

The bizarre war for New York comes to a head at the end of Season 2 as Stick remembers raising a young Elektra riddled with bloodlust. Matt tries to rescue Stick, who’s captured by the Hand — meanwhile, Elektra shows up to kill Stick as revenge.

In the final moments of “The Dark at the End of the Tunnel,” Nobu shows up to drop the bombshell that Elektra is, in fact, the Black Sky. She goes on to reject her destined role as a living weapon for the Hand and instead fights an epic battle alongside Matt against too many Hand ninjas. She dies, and her body is taken by the Hand to be resurrected — but Stick also kills Nobu for good.

It’s hard to overstate the importance of these two episodes going into The Defenders. The revelation that Elektra is the Black Sky along with her death and inevitable resurrection play a prominent role in the team-up series.

Much of Jessica Jones details Jessica’s ongoing conflict with the villainous Kilgrave, whom she kills at the end of the season. As such, a lot of what goes on aside from establishing various characters that return in The Defenders isn’t particularly pertinent for the team-up series.

The very first episode of Jessica Jones introduces us to a number of key characters that factor into The Defenders. There’s not only Jessica herself and Luke Cage, but also powerful attorney Jeri Hogarth and Jessica’s adoptive sister Trish Walker. All four characters have prominent roles in The Defenders.

Most importantly, we immediately learn that Jessica is a devious and incredibly efficient investigator that takes shit from no-one and doesn’t need to rely on her powers to kick ass.

As the season nears its close, Jessica and Luke reunite to investigate Kilgrave’s seemingly growing powers. Trish also uncovers more information that could potentially explain how Jessica got her powers. Ultimately, it’s revealed that Luke was under Kilgrave’s control the entire time, and the two supers fight each other in an epic brawl that only ends when Jessica shoots Luke in the face with a shotgun.

That’s one way to end a relationship, and it makes for a comically tense reunion when the two of them meet again in The Defenders.

In his solo series, Luke has been hiding out in Harlem after his confrontation with Jessica. After gang warfare takes the life of his peacekeeping mentor, Luke takes it upon himself to clean up the streets of Harlem. After an epic final confrontation againt his half-brother, Luke’s real identity as an escaped con is outed and he goes back to prison. Don’t worry about that “consequence” though, because Luke gets out almost immediately in The Defenders.

The first episode in Luke Cage does a lot to establish the character’s new arc this season: After getting shot in the face by Jessica in her show, Luke was in a brief coma and then needed to lay low. So he went into hiding up in Harlem. It’s not until the second episode, when his mentor Pops is gunned down in a bit of pointless gang warfare that Luke takes action and stands up to be a role model in his neighborhood.

It’s a never-ending war that continues when Luke gets out of prison in the beginning of The Defenders.

In the fourth episode of Luke Cage, we finally get the extended flashback that details how Luke got his powers (and his fake name). We also get more information about why and how he wound up in prison to begin with, and his superpowered escape featured in this episode eventually leads to him winding up back in prison at the end of the season.

The homeless billionaire Danny Rand arrives in New York City barefoot and entitled, and though he doesn’t grow a lot as a character in Iron Fist, he’ll be forced to check his privilege and re-evaluate his intentions and methods in The Defenders.

After a distracting first few episodes in which a seemingly insane Danny Rand battles his childhood friends and psychotherapy, the Iron Fist finally meets his father’s former business partner, Harold Meachum. As it turns out, the man once died of cancer and was resurrected using the same methods the Hand used to revive Nobu in Daredevil.

We finally get a first-hand look at the nature of the Hand’s resurrection and even some secondhand accounts of its effects in “The Mistress of All Agonies.” After dying a second time at the hands of his own son two episodes prior, Harold Meachum awakens in a murky swamp in what might be somewhere in Central Park, having been dumped there by Ward. Wandering around in some sort of fugue state, Harold spends the episode slowly relearning how to walk and talk. The resurrected man he becomes has different tastes and is more driven by wrath and bloodlust than ever before.

It would appear that the Hand’s resurrection isn’t without dire consequences.

Danny spends a peculiar episode behind enemy lines, living and training on the same compound that Colleen learned all of her skills at — which as it turns out was with the Hand. Bakuto, her sensei, welcomes wayward souls into the soul and trains them to be the same sword-toting ninjas that have been giving Daredevil such a hard time all these years. The bulk of the Hand’s fighting force based out of New York City undoubtedly comes from this very compound.

Danny spends much of the Season 1 finale wrapping up the dramatic saga with the three Meachums. Weirdly enough, the immortal one (Harold) winds up dead, the mean one (Ward) becomes friendly, and Danny’s childhood crush (Joy) becomes a budding villain in her own right.

But by far the most important aspect of this story is the literal cliffhanger finale in which Danny and Colleen travel to K’un-Lun only to find the interdimensional path closed and the ground littered with dead. This sets them off on a globetrotting mission in between Iron Fist and The Defenders hunting down members of the Hand across the world.

But, we know they’ll end up back in New York with the other three Defenders just in time.