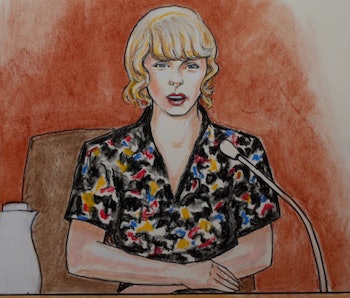 Taylor Swift was in Denver, Colorado, this week, not for a concert but a well-publicized court appearance.

The superstar was there to testify against former country music DJ David Mueller. In 2013, Swift alleged that Mueller sexually assaulted her during a meet and greet with fans. In court, the singer described the events at the center of the case in a blunt manner that courtroom psychologists would approve of:

He stayed latched on to my bare ass cheek as I moved away from him, visibly uncomfortable.

She was deliberately clear and direct:

She even called Mueller’s attorney out for manipulative questioning. When the lawyer suggested that Swift could have handled the incident differently, the pop star responded, “And your client could have taken a normal photo with me.” (True that.)

Needless to say, her refusal to act submissive and polite set the internet aflame. Slate said her testimony was “sharp, gutsy, and satisfying,” and BuzzFeed called it “badass and amazing.”

Numerous studies on courtroom psychology suggest that Swift’s assertive testimony will serve her well with the jury. Despite Swift’s notoriously snake-y public persona, the way she presents herself in court is nearly impeccable.

Courtroom gender dynamics, as a 1995 article in Law and Human Behavior pointed out, often make things difficult for female defendants, especially when women claim to be victims of sexual harassment. “Consistently, women perceive more bias than men,” the researchers wrote, suggesting that Swift was already at a disadvantage before she took the stand.

But the way she delivered her testimony leveled the field. Analyses of speech style have shown differences in the way juries perceive “powerful” versus “powerless” witnesses. In a Journal of Experimental Social Psychology study from 1978, scientists showed that powerful witnesses — those who are confident in what they have to say and in the way they say it — were considered more credible than powerless witnesses, who appeared to hedge or hesitate.

However, some would argue that she could have been slightly more polite. One 1988 analysis of a fake trial in the Journal of Cross-Cultural and Interlanguage Communication suggested that juries prefer polite witnesses, seeing them as more intelligent, trustworthy, and — crucially, for a court case — convincing.

Nevertheless, by being powerful as hell, Swift set herself up for a win. Of course, the choice of the word “ass,” which Swift used multiple times, was hardly polite or jury friendly, but “winning” in the traditional sense doesn’t seem to matter so much to Swift, anyway. In fact, being polite in the face of such gross behavior would be the real loss.

In a 2004 article in the journal Applied Linguistics, British researchers analyzed 5 million words worth of court documents pertaining to sexual assault, rape, and domestic violence. It found that, because the court puts lawyers — who are largely male — in the driver’s seat, many women on the stand find themselves unable to tell their stories. Instead, they are backed into corners with leading or limited questions.

But Swift is in a different situation than most other women. For one, she’s not financially dependent on the outcome of this case, seeking only $1 in damages from Mueller. And she’s also not a novice but a media-savvy pop star with an elite team of lawyers. In short, she can make a statement — and that’s exactly what her attorney, J. Douglas Baldridge, says she went to Denver to do.

“She’s just trying to tell people out there that you can say no when someone puts their hand on you,” Baldridge said in his opening statement. “Grabbing a woman’s rear end is an assault, and it’s always wrong. Any woman — rich, poor, famous, or not — is entitled to have that not happen.”