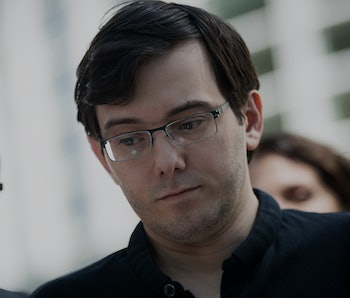 For a guy who famously said “I want to be the world’s heel,” Martin Shkreli sure seems scared of going to prison. The former Turing Pharmaceuticals CEO was found guilty on multiple counts of securities fraud on Friday and faces up to 20 years in prison. Shortly after his conviction was announced, Shkreli took to a YouTube live stream to claim that he probably won’t spend any time in prison and might even get his charges vacated.

But in the same breath, the attention-seeking former executive also said that if he went to prison, he’d be “the new fucking boss” of the prison and would probably be nicknamed “Big Rolls.”

Presumably, this nickname refers to the money he made by defrauding investors and raising the price of a life-saving drug by 5,000 percent. And while he may be right about prison monikers often carrying associations with the nature of a person’s criminal activity, research on felon nicknames suggest he’s dead wrong about getting to make up his own.

In a 1997 study about prison nicknames in A Journal of Onomastics, criminal justice researchers explain how a prison nickname represents incarcerated persons’ attempts to transmit cultural knowledge about an individual. The authors focused primarily on female prisoners, but many of their broader conclusions apply to individuals of any gender.

“Nicknames may provide miniature character sketches or illustrate aspects of a person’s physical appearance, personality, or geographic origin,” they wrote. “They also may serve as capsule histories highlighting critical incidents in people’s lives.”

Part of the reason for this is because prison nicknames also seem to depend largely on who chooses them.

Unfortunately for Shkreli, his personal brand alienates the average American, and the average American is likely to be the person who decides whether he gets a nickname and what it will be. If, as the authors of the Onomastics paper note, “[one] of the functions of nicknames is to demonstrate the separate and exclusive nature of the group,” then Shkreli will have to ingratiate himself into a group before he can even think about getting a nickname. “Through their knowledge and use of nicknames, the researchers add, “individuals demonstrate to themselves and to outsiders their membership in or association with the group.” They also point out that nicknames help distance inmates from prison administration.

Needless to say, it’s hard to imagine a world in which incarcerated people would consider Shkreli a member of their group, even if he has been convicted of crimes. After all, his Daraprim price hike, which was not even illegal, disproportionately affected people of lower socioeconomic statuses, so he’s hardly a Robin Hood figure. But America’s distaste for Shkreli seems to span all social strata: Jury selection for his fraud trial was slowed because more than 120 of his potential jurors were dismissed because of their strong negative opinions of him. Dismissed jurors called Shkreli “a snake,” “the most hated man in America,” and “the face of corporate greed,” reported The New York Times. One potential juror even pantomimed strangling him.

So, even though Shkreli is somewhat of a pariah among polite society, being the face of corporate greed won’t exactly ingratiate him among the common people, either. In fact, as someone who already has a reputation as being an oppressor of the poor, it’s likely that Shkreli’s nickname would fall more in line with the conventions surrounding the way guards are named.

In 1967, folklorist Bruce Jackson related the tale of an illiterate guard known by inmates as “Two Gone” because he mistakenly reported that one inmate had escaped under his watch, when in fact two had gone. This derisive nickname, meant to mock the guard’s ineptitude, was applied to him by the prisoners. Given that Shkreli intentionally brands himself as someone who’s hated by the bulk of people in the world, it seems farfetched to expect that his fellow inmates will respect his preferred name choice.

And while it’s unlikely that Shkreli will serve much time in prison, if any — because, you know, he’s rich — we’re all waiting with bated breath to find out what inmates decide to call the man who has the most punchable face in America.

More like this
Science
16 hours ago
Look: Hidden fossils reveal a microscopic creature that may be resilient to climate change
By Jennifer Walter
Science
16 hours ago
The most controversial alien sci-fi movie on Amazon Prime explores a murky theory on the origin of life
By Tara Yarlagadda
Science
15 hours ago
How do dolphins maintain their glowing skin? A study reveals the surprising answer
By Jennifer Walter
Related Tags
Share: