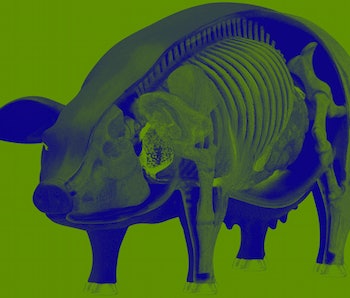 A breakthrough in virus manipulation has brought us one step closer to a future where human bodies are powered by pig organs. In a study released Thursday in the journal Science, scientists from Harvard University announced that they’d surmounted the biggest obstacle in transplanting pig parts into human bodies: the pig viruses that always trigger violent human immune responses seem to have finally been beat.

Pigs, whose organs are roughly the same size and shape as ours, have long been eyed as a possible source of functional transplants for humans, especially as transplant waiting lists continue to lengthen. Between 2012 and 2016, there was a nearly 20 percent increase in the number of transplants that happened in the United States, and that number is only expected to increase as the population grows older, according to the United Network for Organ Sharing.

Research in xenotransplantation — that’s the concept of transplanting organs from other species into humans — has always run into issues with the human immune system, which, perhaps not surprisingly, recognizes pig parts as foreign and attacks them with all their might.

But that soon could become an issue of the past.

In general, two major factors have accounted for the immune response in pig xenotransplantation: Pig proteins and pig-specific retroviruses. Genetic engineering is well on its way to creating pigs that express human proteins on their organs, largely negating the effects of the former. But the transmission of porcine endogenous retroviruses — PERVs, for short — to human organ recipients has been a long-standing problem, and for a long time, scientists couldn’t figure out how to get rid of them.

Unlike regular viruses, which infect and then replicate inside living cells, retroviruses embed their DNA in the genome of the host cell and are stuck there for good; what makes them especially dangerous is that these PERVs can hop from an infected pig cell that’s adjacent to a human cell. There’s no putting pig parts into humans without getting rid of all the PERVs in the pig genome first.

Scientists made some progress in 2015, when a team of Harvard scientists managed to eradicate all the PERVs in a pig kidney cell line, dropping the virus transmission rate to 1000 times lower than normal. The new study is a follow up to that work: This time, the scientists used the gene editing tool CRISPR-Cas9 to similarly inactivate all the PERVs in a pig primary cell line, and then they performed somatic cell nuclear transfer (a kind of cloning) using those cells to make pigs that were totally PERV-inactivated — according to the New York Times, 15 of those piglets are still alive, and the oldest is 4 months old. In theory, those are the pigs whose organs we want inside our bodies.

Of course, the pigs aren’t perfect yet: Human recipients of their organs would, in theory, still have to take huge doses of immunosuppressants to prevent rejection, and a host of other complications could arise, whether immune-related or not. (Many of the pigs died before birth due to cloning complications.) Still, in his interview with the New York Times, CRIPSR pioneer and notorious woolly mammoth-reviving geneticist George Church, Ph.D., said “the first pig-to-human transplants could occur within two years.” Banking on the success of his research, Church founded a company called eGenesis, which plans to “make xenotransplantation a routine medical procedure.” At the rate he and his team are going, it looks like he’ll soon be able to make good on that promise.