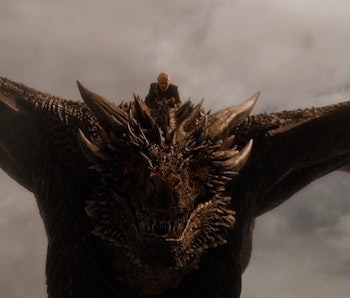 In Game of Thrones lore, the southern kingdom of Dorne was the only nation that was able to fend off the invading Targayens and their dragons. The sigil of Dorne’s rulers, the Martells, is a sun being pierced by a spear. It’s a surprisingly fitting emblem, as the cinematographer behind the massive, dragon battle in the most recent episode of Game of Thrones said that the sun was actually a much more challenging foe than any draconic special effects were while shooting the epic scene.

Robert McLachlan, the director of photography behind “The Spoils of War,” is no stranger to dragons on Game of Thrones. He’s filmed several landmark episodes, including “The Rains of Castamere” (the Red Wedding episode) and the “Dance of Dragons,” which was another big Drogon moment. But, of course, the dragon rampage in Season 7’s marquee battle episode far outshone anything Daenerys’s reptilian children had ever done before. Inverse spoke with McLachlan following the premiere, where he revealed that the hardest part about filming that complicated battle wasn’t what you’d expect.

What was your reaction when you first read the script for “The Spoils of War?”

My first reaction was, “Oh my god. This is going to take a long time, and it’s going to be incredibly laborious and hard.” And I wasn’t wrong.

After you have that initial shock, what were the next steps in actually making that scene become a reality?

I would read the whole script straight through once in a go, and then go back read that one more time, and then sort of break down the components down scene by scene.

The problem with a sequence as massive as that with a heavy visual effects component, most obviously is the dragon needs to be budgeted very carefully, because if you design a sequence that needs six dragon shots instead of two, that’s potentially going to cost millions more dollars. And you can’t start filming until you know exactly what you’re going to be doing.

In a way, it’s a lot like what Alfred Hitchcock once complained about the shooting process, because he was one of the first directors to actually storyboard in advance and plot out ahead of time exactly what he was going to be doing on set. For him, that was the exciting and interesting part of the process, and the boring tedious part was actually shooting the movie. To a certain extent, it’s that way when you have a big sequence like that with so many physical effects, and visual effects, and masses of people involved.

Having said that, I always try to keep myself open for happy accidents. For instance, one day the fog didn’t lift, which we initially thought meant we couldn’t shoot what we’d planned to shoot. But, on the other hand, when the sun started to burn through it a little bit, it looked amazing and it looked like we were shooting in heavy, heavy smog. So, we quickly switched gears and took advantage of it, and got some really amazing shots with the help of Mother Nature, you know, as opposed to sitting on our hands, waiting for something to happen.

What was the most difficult part of this sequence for you and your team?

Shooting a scene outdoors on a vast scale where you can’t control the light from your subjects is always one of the biggest challenges for a cameraman because, in a case like this, the sequence takes place over 15 minutes? 20 minutes? Something like that? And you’re shooting it over days and days and obviously the weather’s going to change. We got completely rained out one day and everybody had to turn around and go back to the hotel cause the poor extras were so cold and soaked they wouldn’t have come back the next day if we made them work.

One of the more frustrating things is that you’ll be ready to do a big complicated shot, and the sun is just right. But, maybe you’re waiting for prop or something, or there’s a holdup or a horse is acting out. You can’t rule when the light’s good, so a cloud comes. You’ve already lost ten minutes, so you can’t really wait another ten minutes for the cloud to go away. You’ve got to go ahead and shoot anyway, and just hope that it’s gonna be a short enough cut that it won’t stick out like a sore thumb.

Is it fair to say that, as a cinematographer, little details like making sure the lighting or the position of the sun are consistent, are more stressful than a crazy dragon POV crane shot that might seem more complex to the viewer?

I mean, if you saw the making of video that HBO released, [you saw] we used almost every piece of movie-making equipment and transportation for a camera that is available. We knew what stuff was under our control, and we had to be a very careful about when we were gonna use each piece of equipment, and for which shots … We were extremely diligent about being prepared and ready with that equipment when we needed it. If you have a great crew, as a cinematographer, you don’t worry about it. You’re only as good as your crew, and luckily both the shooting units on Game of Thrones are absolutely top notch.

But, you can’t control the weather, so for me, on a sequence like that, that’s the biggest stress factor. Cause everything else has been … You’ve truly got control of almost every other element that’s going before the camera, or how you’re going to use the camera.

How did you up the ante for the dragons, compared to when you last shot them? That would’ve been the Season 5 finale, but “Dance of Dragons” had a lot more action.

That’s right. Yeah, that was the first time we had a lot of interaction with the dragons. The big thing this year was we had to keep in mind was the scale of them, and the dimensions that we were given to work with were basically the same as a 747. For instance, when Dany actually lands with the dragon, we had to stake it out so that there were elements there that you know, where it was … the physical place that it was going to occupy.

Apart from that, the fire breathing elements were done after the fact back in the studio, but we also had some extremely bright, warm colored lights on set. What we call “interactive lighting,” so when someone’s about to get burned, it looks more convincing if you physically do light them up brighter than the surrounding areas. And the problem was on a sunny day, even though our lights were very bright, they weren’t bright enough to make someone look engulfed in dragon fire compared to the surrounding areas. That was just one of the hundreds of little scheduling details that the assistant director had to contend with. We scheduled those at the end of the day, when it wasn’t so bright out, so that you see the effect more.

One of my colleagues spoke with the episode’s director Matt Shakman, who said he was very inspired by Apocalypse Now. Was that your inspiration as well?

Yeah. When we first read the script, that was that kind of feeling was really what we were after. I also suggested the feel of a J. M. W. Turner painting, and Matt’s very well versed in fine art, so he knew exactly what I was talking about. Turner did these beautiful atmospheric paintings of the sun trying to burn through the morning fog. That was kind of the feel we were after, but I always wanted to have smoke. Very early on I spoke to the special effects department about having absolutely as much smoke as they could possibly get for us. Again, to help me control the light because you know, if it was too sunny it was not gonna feel very apocalyptic.

The whole point was witnessing the battle through Jaime’s eyes and he’s seeing that the nature of battle has completely changed. It’s like somebody watching the first atomic bomb drop, you know it’s gonna change the game forever. And we wanted it to create that kind of a world, and I needed that smoke.

How crazy would it be for you and the rest of the Thrones crew if all three of Dany’s dragons ever took to the battle field at once?

I think it’d be awesome. I think it would also be very expensive. I think our visual effects people would get a little stressed over that. Who knows?

Season 7 of HBO’s Game of Thrones continues on Sunday at 9 p.m. Eastern with “Eastwatch,” which McLachlan also directed.

This interview has been condensed and edited for clarity.