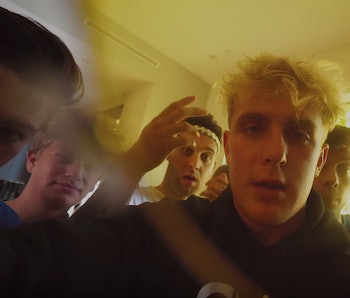 This is what happens when a twenty-something adult man makes a career out of producing vlogs for children; eventually, his hubris catches up to him. The adults around him finally learn who he is and begin to police his behavior, and the fickle young audience he’s been pursuing changes its mind. Jake Paul, once a popular Vine user, and now a popular YouTube personality, won’t be the last young person whose celebrity career ignites and fizzles all on the internet, but he’s certainly the most prominent falling star at the moment.

Watching Jake Paul, his older brother Logan Paul, and both boys’ strange, all-white rival crews of amateur comedians, pranksters, and spoken word artists (whatever they’re doing isn’t really rap per se) is a strange ride. Trying to separate the younger Paul brother’s increasing disdain for the media that calls him a bully, a racist, and a spoiled rich kid from his attempts to rebrand himself as “the guy you love to hate” will give you whiplash. So let’s get into it, shall we?

The fall of Jake Paul

This summer, Paul’s antics in West Hollywood, which he stages and films for his YouTube channel, landed him a nasty lawsuit from his neighbors. He broke up with his girlfriend, YouTube celebrity Alissa Violet, and his music video for a song called It’s Every Day Bro was quickly down-voted by viewers until it reached [the most “disliked” video on the platform. He was then fired from his minor role on a Disney Channel TV show.

During this period of unrest, Jake Paul began trading “diss tracks” with his older brother, each of them teasing their fans that every subsequent verse would prove more vicious than the last. In Logan Paul’s video for The Fall of Jake Paul, Jake gets roasted for not having as much money as his brother (both Paul brothers are rumored to be millionaires), not having a dedicated enough crew (Jake’s gang of skinny white guys is called Team 10, and Logan’s goes by The Logang), and for having lost Alissa Violet’s trust. Violet appears in Logan’s video, and the final shot bizarrely shows them about to kiss.

To an outsider, it’s perplexing that these brothers, who look almost exactly alike, are famous to millions of young people who follow their every move. They’re not quite comedians, not quite rappers, not quite media moguls, and not quite clothing designers, and yet their videos boast experience in, and mastery of, all four fields.

In response to The Fall of Jake Paul, Jake released YouTube Stars Diss Track, with a foreword that reads, “This isn’t a diss-track. It’s a message to all the news and hate,” which is confusing for several reasons. The song is a message to the news? Does he mean international news, or just news as it pertains to his career? Is it a message in support of news and hate, or is he decrying both the existence of hate, and the general American news cycle? Are we disparaging the media in a Trumpian sense?

Essentially, the video is just more nonsense, but it’s nonsense that has been viewed nine million times and counting in two days. Jake challenges anyone in the media who’s called him a bully or irresponsible this summer, offering up examples of his volunteer work while repeating again that he’s just a kid and is trying to figure things out — things like basic empathy and humility.

What’s more, Jake promised a third verse (as mentioned before, the brothers like to leave off a verse or two and tell their followers that the content was just too brutal for the light of day). Since posting Diss Track, Jake has uploaded two subsequent videos to his channel with titles like Third Verse, Not Click-bait, though neither were a third verse, and both were click-bait.

Though most people over the age of 18 don’t know who the Paul brothers are, their probably-staged musical feud has ballooned in popularity to the point where Twitter users are watching Jake’s video and are unable to determine who he is, or why he’s doing all this online.

At this point, if the younger of the internet-famous Paul brothers had any sense, he’d pivot his attempt at an earnest rap career into an Andy Kaufman-style collection of performance art videos. As for that mysterious “third verse”, he’ll either post it at a time guaranteed to land him the highest viewer numbers, or he didn’t write one at all. It’s chilling to imagine what lyrics could be more savage than “Where was y’all at when Make-A-Wish hit me, to meet my girl Caylee. Man that shit changed me.” Nothing more savage than throwing a sick child under the bus to prove to your online fans that you’re not a bad guy.

See also: A List of 28 Very Good Vines that Will Never Die

More like this
Culture
Sep. 15, 2022
The cults that survive even when the prophecy fails
By Peter Ward
Culture
Sep. 20, 2022
5 amazing sci-fi shows and movies leaving Netflix in September 2022
By Robin Bea
Culture
Sep. 17, 2022
You need to watch the most realistic apocalypse movie of the century on Netflix ASAP
By Jake Kleinman
Related Tags
Share: