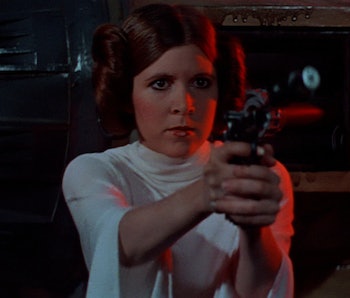 It’s no wonder Leia Organa was always so impatient with Luke and Han’s often-bumbling trial and error. Someone had to save their skins, and Leia — a senator, princess, and Ph.D. by the time she was 19 — was the perfect candidate.

Yep, it turns out Leia already had her Ph.D. in Star Wars: A New Hope while her twin brother, Luke, was playing with a toy T-16 in his uncle’s garage.

On Friday, Becca Harrison, Ph.D., tweeted a quote from Star Wars creator George Lucas, garnering the internet’s attention and starting a firestorm of commentary from Star Wars fans who hadn’t already known. Leia Organa, perhaps already one of the most accomplished characters in the Star Wars universe, also graduated with a Ph.D. at 19.

Who does that? Oh, that’s right, General/Princess/Senator/Dr. Leia fucking Organa does that.

Harrison unearthed the quote with the help of Carolyn Cocca’s Superwomen: Gender, Power, and Representation (2016), but it was originally taken from Lucas’s commentary on a special 2004 DVD release of Star Wars: A New Hope.

Lucas said in the commentary that Leia is “the same age as what Luke was supposed to be, but instead of being kind of an idealistic naive farm boy from the far reaches of the netherlands, she’s like a very sophisticated, urbanized ruler, a Senator, so she’s a politician, she’s accomplished, she graduated, got her PhD at nineteen and she rules people and is in charge. [I needed an actress] who could be young and play with a lot of authority… and push these guys around.”

Of course, the role of Leia Organa would have been bereft without Carrie Fisher, who was tasked with selling this extraordinary character in 1977. Fisher, also 19 when she first appeared on-screen as the beloved princess, imbued Leia with a light and intelligence that remains iconic to this day.

And it’s because of Fisher that nobody should be surprised to find out about Leia’s accomplishments. Star Wars fans have never doubted Leia’s intelligence, determination, and ability to kick ass. She just so happens to have a degree to back her up on all those things.