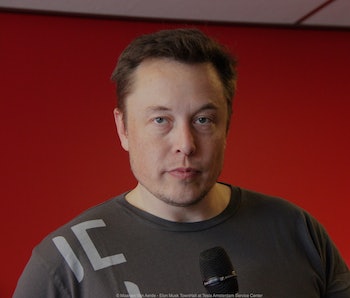 Elon Musk is going to reward loyal customers. The Tesla CEO confirmed on Sunday that the company still plans to give “something special” to those that reserved their Tesla Model 3 on the first day orders were open, back in March 31, 2016. The $35,000 car, which started shipping last month, is a pivotal moment for the company, as it seeks to attract a far wider base of consumers to its electric vehicle offerings.

The announcement follows on from the Model 3 launch event on July 28, where the first 30 customers received their vehicles at a special handover event. The recipients were all employees of Tesla, and as production has yet to hit peak capacity, only the long-range model with the premium enhancements package was available for the taking.

Fans who have placed their $1,000 deposit hope to be among the first to receive a Model 3, but some have a long wait on their hands. The base model, capable of running for 220 miles per charge as opposed to the 310 miles of the long-range model, will start shipping later this year. Customers in right-hand drive markets will have to wait until 2019 to receive their orders, meaning some day one reservation holders will have waited for three years to get their car.

In many ways it’s par for the course for Musk, as he uses his Twitter account to reach out to followers directly and establish a connection. He can be seen regularly dropping sci-fi recommendations and making big company announcements.

It’s not the first time Musk has mentioned something special for those early reservation holders, alluding to a gift back in November. In May, he again reassured fans that there would be “something cool for sure.”

Fans have been speculating about what the “special something” could be. Guesses include a t-shirt, a signature color exclusive to day one reservation holders, or even a complimentary Ludicrous upgrade for a special high-performance mode. With Musk’s announcement of a high-erpformance Model 3 to hit the roads summer next year, though, a Ludicrous mode as a special treat seems unlikely.

“I would like to see the over-the-air upgrade charge waived for options that aren’t available when we take delivery,” said Tesla forum user VintageDude in a June thread. “For example, if advanced autopilot software isn’t available for early deliveries, then make the after-delivery cost be the same as if it was bought at delivery.”

“Well if I can’t get free, or upgraded charge hours how about mustache emblem on front?” said user hapstr. “I’m not a fan of signature color.”

Whatever it is, hopefully it doesn’t take too long to ship.