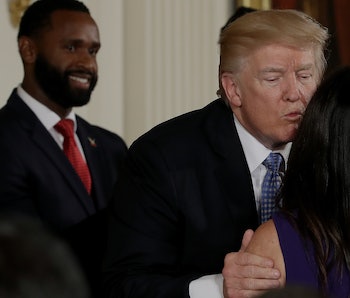 In 1998, news that President Bill Clinton had been cheating on First Lady Hillary Clinton shocked the world. Americans were glued to their televisions, and we gleefully threw White House intern Monica Lewinsky under the bus for being the “other woman” in the most high-profile case of marital infidelity in contemporary history.

Now, President Donald Trump has not only cheated on multiple partners, but he’s bragged about it quite a bit. The knowledge that a sexually unfaithful can be elected to the highest office in the nation doesn’t really stun Americans anymore; in fact, just twenty years after the mainstream media flooded the zone with quotes about Clinton putting a cigar in Lewinsky’s vagina, quotes of similar indecency from Trump barely made a dent in his rapid rise to the presidency. So where are we with infidelity?

Interestingly, the data also shows that 3 out of 4 people across generations maintain that having sex with someone who is not your spouse is always wrong, so we’re not looking at a difference in judgment, just a difference in self-control. As IFS points out, behavior that doesn’t match up with our morals is “a classic story in the social sciences”.

The data also paints a pretty damning picture of people currently in their 50s and 60s, who are leading the cheating-on-your-spouse charge. Notably, once people reach their 70s, they’re much less likely to cheat - perhaps because their options are dying off, and perhaps because everything just takes more energy when you’re elderly, including O.P.P.

The IFS attributes the high rate in screwing around in older people to behaviors they witnessed when growing up. “These are the first generations to come of age during the sexual revolution,” the study reports, “so it’s understandable they are more likely to have sex with someone without their spouses. They may have firsthand experience with 1970s-era experiments with nonmonogamy. A few people born in the late 1950s may have had swingers for parents, leading offspring to question taboos surrounding infidelity.” Millennials, on the other hand, were brought up in large numbers by divorced parents, so the same logic could be applied to young adults, explaining their hesitance to cheat.

The study ends by discussing the rise in destigmatized, ethical non-monogamy, and its projects that a new attitude toward monogamy may be on the horizon: one that doesn’t condone cheating and lying, but one that sees the rules of committed relationships as flexible, provided both partners communicate honestly with each other. Even if many Americans aren’t currently engaged in non-monogamous, but emotionally committed relationships, they are certainly becoming more interested in the idea.

See also: Meet the Woman Who (Literally) Wrote the Book on Ethical Non-Monogamy