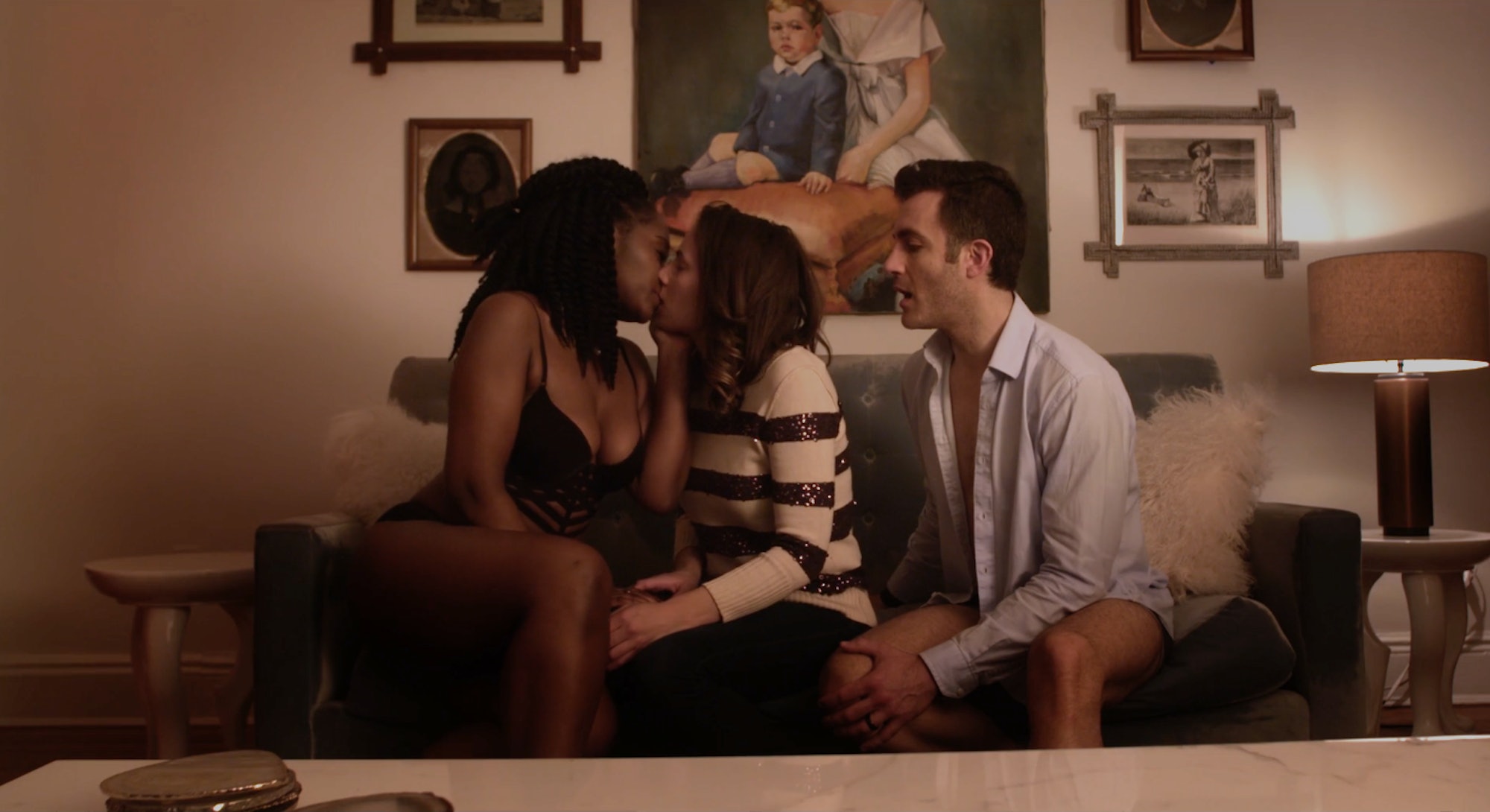 In an era of changing relationships and new expressions of love, it can be difficult — even intimidating — to understand your spot on the spectrum. It might seem all the more appealing to maintain the safe, comfortable relationship norms you’ve always known. But that’s the last thing you should do according to Dedeker Winston, author of The Smart Girl’s Guide to Polyamory: Everything You Need to Know About Open Relationships, Non-Monogamy, and Alternative Love. Instead, Winston says, take ownership of your identity, and find the kind of love that makes you happy.

Written with women in mind, Winston’s book is a colorfully written manual for anyone who’s curious about what polyamory does and doesn’t mean, or who’s realizing that traditional relationships may not be for them.

Inverse caught up with Winston to talk more about the book, stigmas surrounding polyamory, and the importance of self-awareness.

What was the idea behind the book?

I wanted to create something based on nontraditional relationships and polyamory, but I still wasn’t sure what the angle would be. I happened to one day be reading the dating advice in Cosmo, and I was getting physically nauseated. It felt so disempowering. It was advice about how long to ignore a guy via text, and how a hallmark that your relationship is getting serious is that you’re at his place and don’t snoop through his stuff. I liked the idea of writing about nontraditional relationships in a way that gave women more agency. In historical examples of people with multiple partners, it’s easy to see very unattractive models. Images of Mormons with child brides, or of sultans with a harem. I like the idea of turning that on its head. Not necessarily telling women to go out and collect a bunch of men, but empowering women to choose the kind of love life they want to have.

The common thread in those examples you gave — it’s always a male figure who coerces a group of women with or without their consent.

Exactly. And I think equality comes from trying to empower both men and women to craft their love life from the ground up, outside of whatever the status quo may be.

Do you think the experience of a polyamorous woman is different from that of a man because of how multiple partners are perceived?

Certainly. I think the male side comes with its own challenges. On one hand, it may be a little easier because we’re used to this narrative of men being playboys. But then, a lot of women can reject polyamorous men because they think of them that way. On the female side, we’re still dealing with endemic slut shaming. We have this discomfort with acknowledging that a woman may have sex with or romantic ties with multiple people because that’s what she wants. Sex isn’t just to please her man or something.

What is the overriding reaction people have to polyamory, given those connections are so strong?

Reactions run a wide range. I think because millennials are more comfortable embracing non-monogamy, the reaction is, “You’re young. Once you find your soulmate you won’t want to have multiple partners.” It’s what happens with bi or pansexual people. There’s erasure. It’s called an in-between state. But reactions run the full spectrum. Some people are intrigued and interested. Some are shocked and disgusted. Some people will interpret your choice of non-monogamy as an attack on their choice of monogamy and feel defensive. But it’s not about dismantling monogamy or tearing down the traditional family structure. It’s opening up the spectrum of possibilities to include many options of relationship choice. All of those choices are viable and valid, and it’s up to you as an individual to explore and discover where it is that you’re happiest.

Are there ever comparisons made to polygamy? Is that a connection that people prefer to avoid?

It’s interesting because the word “polygamy” is very charged. We tend to associate it with a bearded man named Ezekiel and his child brides. But polygamy means “multiple spouses.” It doesn’t mean multiple women or wives. There’s some division in the poly community about marriage rights. Some argue that instead of marriage, we should protect the rights of single people. I think the issue for the poly community is going to be custody. The bigger threat for polyamorous people is having their kids taken away. A vindictive ex finds out that the mother of his children is dating two men, so he uses that as leverage in court to get custody of the children. Sadly, that’s happened many times. I think shifting the discussion of family away from the two-person, married dad will bring “polyamorous rights” into mainstream conversation.

You talk in the book about how it’s possible to be intimate with more than one person at the same time. Do you find that other aspects of relationships also translate in the same way? For example, is it emotionally exhausting times two, or three, or however many?

I want to say yes and no. With traditional monogamous relationships, there’s this common assumption that, once you’re partners with somebody, they own all your free time. You’ll eventually move in with them. You’re going to share finances and child-rearing with them. All of your sexual and emotional needs are going to be shared with them. They’re going to become your police officer, your therapist, your parent, your coach. And you have to do the same for them. That’s something people argue favors having multiple partners. You don’t have to be everything to this person at all times. You may still require a lot from each partner, but it’s not 100 percent. Sure, maintaining multiple relationships does take work. But if your partners have other partners as well, the effort, time, and energy get distributed.

The other thing you talk a lot about is jealousy. Is it a common hurdle that people have to work through in exploring polyamory?

There can be this assumption that, if you’re polyamorous, you’re free of jealousy, or you’re naturally not a jealous person. I was an extremely jealous person — ironically, much more so in my monogamous relationships. A lot of it has to do with social conditioning. We have the message beaten into us that what makes a person special is that they’re the only one. We’re taught, through music, and movies, and social media, that specialness is tied to exclusivity. It’s about realizing, “Oh no, what makes me special is all the things I bring to the table. Not just that I’m the first and only one at the table.”

When it comes to romantic jealousy, the common solution is to make sure you’re in a context where you never have to experience jealousy, ever. I think it’s about realizing that all forms of jealousy can be worked through in a healthy way. There isn’t something special about relationship jealousy that makes it impossible to handle.

Is the poly community looking to situate itself within the resistance to President Trump’s administration and policies?

I would say yes. We have a vice president who’s been very clear that he feels relationships and sexual activity should fit into this very specific box. That leaves a lot of people outside. The poly community embraces a variety of sexualities and gender expressions. It’s been a place where people who don’t fit inside that box of heterosexual, cisgender, monogamous have been able to find acceptance. Considering those ties, it’s difficult to avoid being part of that resistance.

If a couple came to you and said they were looking to explore polyamory, what advice might you give them? What sorts of questions should they ask?

Wow, so many. It’s important for couples, especially people who’ve been couples for quite a while, to ask some uncomfortable questions about identity. Part of opening up a relationship means separating your identity from your partner. It doesn’t mean that you abandon the relationship or no longer consult your partner, but it does mean taking ownership of more autonomy. It also means extending more trust. Even though my partner make more independent choices, they’re still making choices in consideration of me and our relationship. It’s scary to let your partner be free and independent, and just trust that they’ll be there. I push people in the direction of choosing trust rather than fear — which is easier said than done.

It seems like the kind of self-exploration you’re talking about is beneficial to everyone — whether they decide to explore polyamory or not.

Definitely. If someone reads the book and decides monogamy is what they want for relationships, I have so much respect for that. I would rather a person consciously choose monogamy than land in monogamy by default because that’s the path society gives us. That self-examination and self-awareness of your values, your emotional makeup, and so many other factors — everybody can stand to do that.