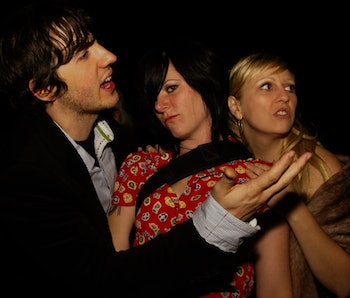 Earlier this month, OkCupid became the first mainstream online-dating service to allow two partners to search for their next partner together. The move has generally been interpreted as OkCupid’s official inclusion of polyamory as an option for romance. Previously the site had been used by people in polyamorous relationships, but didn’t have a function expressly built for that purpose. Now, if a user specifies that they are “seeing someone” or “in an open relationship” in the status section of their profile, they are given the option to link their account with that of their partner.

While some in the polyamorous community credit this option as a much needed step towards visibility, the system isn’t quite aligned to what polyamory means for those who practice it in a self conscious way. While the parameters of any relationship are up to the people involved, polyamory typically (but not always) implies multiple, loving relationships that exist between overlapping couples. Traditionally, polyamory isn’t predominantly a sexual arrangement, which is why the option of only linking to one partner is problematic and the implication that polyamorous relationships tend toward the threesome is — at least rhetorically — dangerous. In Pride Zachary Zane writes:

While Zane argues that the benefits of this option outweigh the cons — visibility for any community seen as fringe is always imperative — he does have concerns that the move by OkCupid could potentially further the misinterpretation of polyamorous people as folks on the hunt for sexual flings, rather than new committed partners. He’s not alone in this opinion.

“I can confirm that it only allows you to link to one partner,” says a commenter on the blog Poly In The Media. “I may only have one partner at this time, but I’d still not use it for the hierarchical implications. I’m afraid that this may simply codify the impression of unicorn hunting as the norm for OkCupid users (certainly a stereotype).”

But the debate of whether OkCupid is depicting what it really means to be polyamorous probably resonates very little with OkCupid itself. OkCupid’s business are these unicorns because unicorns are what the people, or at least, the data, says the people want. Studies show that about 4 to 5 percent of the United States population identifies as polyamorous. What OkCupid’s data says, according to The Atlantic, is that 24 percent of its users are ‘seriously interested’ in group sex and 42 percent of them would date someone in an open or polyamorous relationship.

These numbers, eight percentage points up from five years ago, don’t necessarily mean OkCupid is opening its big data-driven arms to polyamory — it means the company knows that there’s a rapid increase in users who want non-monogamous relationships. While Jimena Almendares, OkCupid’s chief product officer, told The Atlantic that it’s the company’s belief that people are now more “open to polyamory as a concept” she doesn’t pretend that OkCupid is operating on a more inclusive agenda.

“Almendares said OkCupid is agnostic about the kinds of relationships people pursue on its platform — it’s simply following the numbers,” writes The Atlantic’s Olga Khazan.

Data is in part what has made OkCupid so successful — it’s able to boil down the seemingly endless free data provided by its users to cipher down much of what it means to date and what people are looking for in a date in 2016. OkCupid programmers take their user’s raw data — not including their identifying information —and comb through it to identify behavioral trends like, for instance, this desire for less monogamy.

But it’s this very data that could potentially bury, not benefit, the polyamorous community’s efforts for respect and recognition. The numbers say group sex is in but there’s not an actual option for people to tick off their relationship status as polyamorous. Pepper Mint, an advocate for non-monogamy, brought up this point with CNN in his analysis of the change.

“It’s good news but it’s not just OkCupid being generous,” says Mint. “It’s well-known in the poly community that if you want to date online you go to OkCupid. What we’re really seeing is non-monogamous purchasing power.”

The debate about if OkCupid is failing or succeeding at representing the polyamorous lifestyle is moot — all it is doing is following the numbers. And it will take more numbers — like the increased visibility of polyamorous people — to convince the company to provide further polyamorous-friendly services.