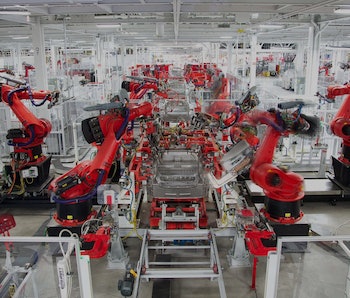 Tesla and SpaceX, the companies to which CEO Elon Musk devotes most of his precious time, don’t work within separate high-tech bubbles: Their engineers like to collaborate.

During a question and answer portion of Tesla’s second quarter 2017 earnings call on Wednesday, Morgan Stanley analyst Adam Jonas asked Musk if he could pose a question about space. Musk groaned, thinking that the call was about to get pulled into a tangent, but Jonas clarified that he just wanted to ask whether SpaceX’s space-age technology and research had helped Tesla at any point. It turns out that it had — and recently.

Musk passed the question off to Jon McNeil, the president of global sales and service, who recounted a moment just last week when Tesla tagged in SpaceX to help with a tricky service fix.

“There’s some really great collaboration continuously between the SpaceX and Tesla teams on materials and other challenges,” McNeil began.

“We had a challenge in service just over the past week where we needed to determine the veracity of an object deep within our structure, aluminum casting, and that’s something the SpaceX team knows how to do,” he explained. “Our team reached out to the SpaceX team, and they helped us to solve that with some ultrasound sensors so that we could quickly isolate where the issue was and take corrective action.”

“And it saved us 8 hours of work per car,” Musk chimed in. “This cross fertilization of knowledge from the rocket and spacecraft industry to auto and back and forth I think has really been quite valuable.”

It’s good that SpaceX was there, because Tesla has previously experienced a nasty accident with aluminum casting; in November 2013, three of its workers were injured by hot metal after a “failure in a low-pressure aluminum casting press,” as described by Tesla in a statement.

In the earnings call, Musk also revealed the number of reservations that the Model 3 has racked up so far, announced that the Model Y will arrive sooner than expected, and disclosed details about Tesla’s forthcoming “MegaSupercharger” stations.

More like this
Innovation
8.8.2022 10:00 AM
A wild new plane-train hybrid could whoosh you to your destination — if it can get off the ground
By Molly Glick
Entertainment
8.5.2022 12:30 PM
For All Mankind Season 3’s space mogul is better than Elon Musk — here's why
By Ryan Britt
Innovation
3 hours ago
Indoor lights make us sick — this technology could fix that
By Miriam Fauzia
Related Tags
Share: