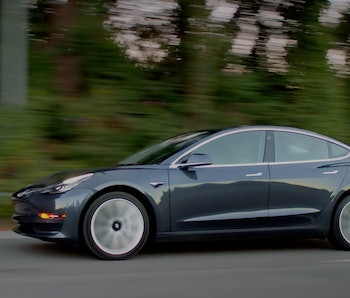 When Elon Musk first announced the compact, more affordable Tesla Model 3, fans and first-time EV buyers flocked to Tesla’s site to pre-order the car. But after reporting a crazy wave of initial reservations that quickly reached the hundreds of thousands, Musk stopped really paying attention to the number. On Wednesday, he finally revealed what it was.

During a question and answer portion of Tesla’s second quarter 2017 earnings call on Wednesday afternoon, Musk mentioned that Tesla has received around 518,000 total reservations for the Model 3 since its initial unveiling in April 2016. Of course, there have been some cancellations — over the past year and change, that number has sunk to around 455,000 net reservations.

It’s difficult to pinpoint the numbers any further than that, because since Tesla’s July 28 debut of the Model 3, the company has been receiving 1,800 new reservations every day. That means if you place a reservation now, you’re going to be at least, like, 464,000th in line. Musk said on July 28 that the wait time for a new Model 3 is close to 18 months, or “late next year,” in his words. Fortunately, the company is still selling Model S and Model X vehicles with little to no wait, which is all part of Musk’s plan to “antisell” the Model 3 in order to get people to pay more for a Model S — as Musk said on Wednesday in reference to the Model 3 in showrooms, “We don’t even want to talk about it really.”

“It’s like if you’re a restaurant and you’re serving hamburgers, and there’s an hour-and-a-half wait for a hamburger, do you really want to encourage people to come buy more hamburgers?” Musk said during the call.

The Model 3’s much-hyped $35,000 price tag might look appealing, but after adding in Autopilot and other luxury features, or springing for a long-range version, what you’re paying for isn’t so much an affordable car as it is a mid-range luxury sedan. If you can afford one of those, you can probably afford a Model S, and Tesla’s sales strategy appears to be based on that assumption.

As for those who pre-ordered a Model 3 in hopes of getting a more reasonably priced Tesla, they may get cold feet when they realize it’s not really affordable for middle-class car buyers at all. So that net reservation number may not go up by as many as Tesla is claiming, but at least now we finally know what it is.