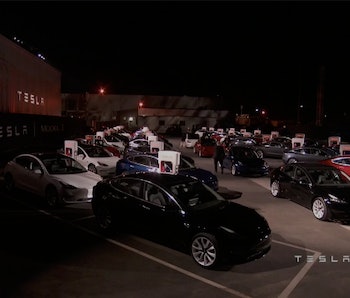 Tesla CEO Elon Musk decided that a stage was too slow, so on Friday night, he delivered an entire parking lot of brand new Tesla Model 3s to a group of employees and lucky friends of the company.

A raucous group of fans counted down to Musk’s big entrance, when he rolled onto the stage in a cherry-red Model 3 while the Arctic Monkey’s “R U Mine” blared over loudspeakers. After some preamble, Musk revealed that the Tesla Model 3 would have two distinct versions, standard and long range, and then let 30 lucky customers loose into a parking lot filled with charged-up Model 3s.

Musk officially debuted the company’s first affordably-priced electric vehicle, at a massive unveiling event outside the company’s Fremont factory on Friday night. Tesla sees the Model 3 as the first step in the company’s transition from a luxury car brand to an all-encompassing clean energy company that produces mass market vehicles in conjunction with individual solar power solutions and utility-scale energy storage. But on Friday, it was all about the Model 3. Musk kept the ceremonies short, speaking for around 15 minutes before jumping right into the deliveries.

Musk said that in July, the company produced 50 brand new Model 3s. It’s keeping 20 of them for future testing purposes, but delivered the other 30 on Friday night in front of a cheering crowd.

Unfortunately, fans that placed a reservation for the Model 3 tonight will have a long time to wait. Musk said that the wait time for a Model 3 purchased today is close to 18 months, as cars would likely not arrive until “late next year.” Still, for the hundreds of thousands of customers who pre-ordered the Model 3, 2017 or 2018 will probably bring a brand new car into their life. Musk was cagey on the details, but he wanted one thing to be clear: the Model 3 is here.