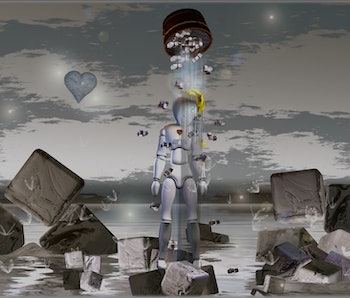 Hazel sits in a famous tech mogul’s office as he pins her in a coldly assessing gaze. On his desk is a bowl she assumes is filled with something normal like candy but turns out to be white rocks on a bed of blue flames. When she asks his assistant if there’s a vending machines around, she’s offered bioenginnered kelp. Hazel isn’t a person on a job interview with Elon Musk — rather, she’s the protagonist of Alissa Nutting’s new novel Made For Love, and she’s on a date.

Give or take a dolphin sex subplot, the summer’s two sharpest novels — Made For Love and Catherine Lacey’s The Answers — are remarkably similar. The both mash-up love and tech culture in surprising ways.

Made For Love revolves around Hazel, a woman trying to escape from her tech mogul husband Byron. Throughout their marriage — which Nutting shows in flashbacks — he uses his company’s cutting-edge gadgets to monitor every aspect of her life. When he takes this too far with a brain chip that conducts surveillance on her thoughts, it’s the last straw that prompts Hazel to flee from his luxurious compound to her father’s senior citizen trailer park.

Readers will see figures like Steve Jobs, Mark Zuckerberg, and Elon Musk in Byron. But according to Nutting, he’s also built with a healthy dose of her own love life and 50 Shades of Grey’s Christian Grey.

“I started writing it during my pre-divorce months,” Nutting told Inverse. “I was dwelling on the impossibility of leaving anyone that you’ve been in a relationship with, and the ways that technology in particular makes it difficult to move on from someone, with social media — always being able to search and find someone online. I was thinking about writing that in a metaphorical way.”

Made For Love brims with wicked humor and quirky characters grappling with the grey area where sex and intimacy collide. Mixed in with the story of Hazel and Byron are subplots about Hazel’s father improving his golden years with sex dolls, a con man who develops a sexual obsession with dolphins, and a survivalist who Hazel uses as an antidote to Byron.

About where Christian Grey comes in, Nutting said the popularity of 50 Shades of Grey was at its zenith when she started writing Made for Love. “At the time it was just so huge,” she explained. “If a billionaire was to pluck this unknown young woman up for marriage, there would probably be these kind of heavy strings attached. It wouldn’t just be about his desire to give her endless sexual pleasure. So I was thinking what might it actually be like if that scenario were to occur.”

From Made For Love:

Sure, she’d wanted to believe the narrative that she was inexplicably lovable: one encounter with her and a calculating, domineering technology genius was swept off his feet…But he’d assumed that choosing her meant she would perform feats of active gratitude on his behalf for the rest of her life. Which actually, Hazel was fine admitting, was probably a fair thing to expect, given who he was. So many women would’ve been able to fall under his spell….why shouldn’t she?

Like Nutting’s novel, Catherine Lacey’s The Answers is about characters who use science and technology to improve their capacity for intimacy — and needless to say, this complicates it even further. The story also centers around a powerful and wealthy man.

But her character Kurt Sky is a famous actor instead of a tech mogul, and he’s not just using his schemes against one woman. He ropes an entire team of women into the “Girlfriend Experiment,” or the “GX” for short.

Lacey begins The Answers with Mary, a woman who signs on to the job of Kurt’s Emotional Girlfriend. The purpose of the GX is, as his assistant explains, “both a scientific experiment we’re conducting for the good of society at large and a healing exercise for Kurt in particular, a sort of recalibration of his understanding of himself in relation to others.”

She wasn’t expected to conduct any meaningful discussions – as there was the Intellectual Girlfriend for that – or to comfort him – since that was up to the Maternal Girlfriend. She only had to listen and respond to Kurt in the way she’d been trained…she spoke as infrequently as possible, always below the decibel level she’d been trained never to breach, and never using any of the words on the black list: vibe, fiscal, underscored, kitty, literally, lactose, hashtag, hoopola, whatevs, vomit, and several others.

As the narrative progresses, The Answers shifts perspectives, jumping from Mary to Kurt to the woman who signs on to be the Anger Girlfriend to Kurt’s long-suffering assistant. All the while, a research team with shadowy goals monitors the proceedings.

“Sometimes you’ll hear someone speak about a study that proved this or that thing to be true,” Lacey told Inverse. “And while there is a method by which various phenomena can be explained or understood, studies about emotions or relationships seem extremely fraught. At the same time, the technologies that can be used to study what is happening in the brain are becoming increasingly advanced. Yet human beings are still the same emotional, contradictory, elusive, bizarre creatures that we have long been. We want to understand ourselves and our world and we both can and cannot do this. That tension is incredibly interesting to me.”

The area where Nutting and Lacey differ the most is their stances on whether their central male characters are sociopaths.

Lacey said, “It’s my feeling that if you diagnose a character you end their story. Of course Kurt makes some very questionable and often very narcissistic choices, but… it’s a very human impulse to want the best for oneself. But of course there is lots of darkness in the most extreme expression of that desire.”

Nutting, on the other hand, embraces Made For Love’s Byron as a sociopath.

“I was reading a lot of about the psychology of sociopathy,” she said, “And I was thinking about the ways that love, along with money, is often one of these sources of manipulation that we can couch our own personal desires in. We say that we’re doing something for love or use it to get people to relax in a vulnerable position. I was thinking about what love might mean to someone who is used to hearing ‘yes’ to everything. What does love mean to someone who basically gets their every desire?”

Like all provocative novels, Made for Love and The Answers don’t reach any definitive conclusions on this question. They crackle with wit, spinning narratives that feel simultaneously preposterous and all-too plausible — give or take enough money and incentive to crack the science of love.