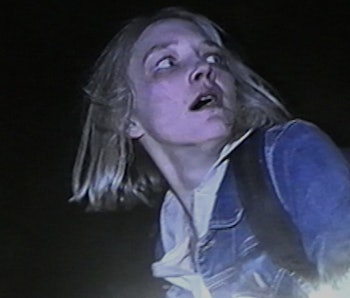 In 1997, a series of bright lights seemed to come from nowhere over Phoenix, Arizona. Thousands on the ground watched the lights, believing they were witnessing the end of days. The lights spun around the sky before coming to rest on the horizon for an hour before disappearing. In April 2017, a found footage thriller, Phoenix Forgotten, hit theaters, fictionalizing what actually happened.

In the film, a fictional girl named Sophie Bishop takes a camera into the desert at night to track down her missing brother, Josh. Josh is allegedly one of the kids who filmed the Phoenix Lights, but he’s fictional as well. Although there was no Josh Bishop when the Phoenix Lights ignited the sky in 1997, there were thousands of people like him. Many filmed what they saw, and many still maintain that they witnessed extraterrestrial activity, but unlike Phoenix Forgotten’s Josh Bishop, no one disappeared mysteriously.

So Who Are the Real Josh Bishops?

Dr. Lynne Kitei was a physician living and working in Phoenix when she, like many others, saw the lights over the city. She changed her professional path after that evening, electing to work instead in documentary films regarding alien encounters. She published a book on the lights in 2017.

Kurt Russell has maintained since 1997 that he was a witness to the lights, and that he was flying a plane above them when they appeared. Bizarrely, he has told the press that he forgot all about seeing the lights until he came upon his wife, Goldie Hawn, watching a documentary on them years later. When the documentary mentioned a pilot, Russell thought, “That was me,” and upon checking his pilot’s log, he confirmed that he had been there that night.

Former Phoenix City Councilwoman Frances Barwood saw the lights and later investigated the case publicly, though she was ridiculed by her colleagues in politics, who called her a conspiracy theorist. This stigma regarding belief in extraterrestrials kept former Arizona Governor Fife Symington from going public with his Phoenix Lights theories, which he only did years after the controversy died down.

So, though Phoenix Forgotten’s Josh Bishop isn’t real, there are plenty of real people who still maintain that they saw the Phoenix Lights in ‘97, and many of those witnesses believe they were seeing something inhuman. Take from that what you will.

Phoenix Forgotten is now available to stream on Amazon.