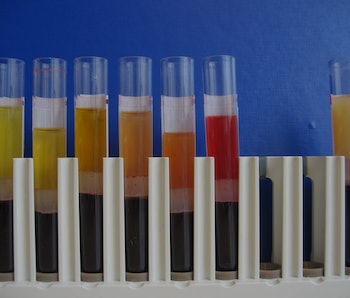 A horrific contaminated blood transfusion debacle that started in Canada and spread to the United States and the UK is now being turned into a Sundance TV miniseries called Unspeakable. On Saturday, news broke that Stargate executive producer Robert C. Cooper, the creator and showrunner for the new series, will tell the story of the tainted blood scandal of the 1970s and 1980s, in which more than 2,000 Canadians were infected with HIV and another 30,000 contracted hepatitis C because of contaminated blood donations, resulting in 8,000 deaths. The story hits especially close to home for Cooper, who contracted hepatitis during the tragic public health breach.

Though the events happened decades ago, they’re still very much in the public eye. Currently, British Prime Minister Theresa May is investigating Canada’s tainted blood products entered Britain’s blood supply 30 years ago, killing 2,400 people — an event that members of parliament have called “one of the worst peacetime disasters in Britain’s history.”

Cooper’s version of the story will be based on two books, Bad Blood by Vic Parsons and The Gift of Death by Andre Picard, but certain facts about the event are well known: The tragic breach in public health started as demands for blood increased and blood products (its components, like platelets or plasma) began to be sold for profit. The profitability of these products led companies, like Canada’s Connaught Laboratories, to source blood from populations at high risk of exposure to HIV or hepatitis C — most notoriously, U.S. inmates.

According to Dr. Don Francis, a key witness during the federal investigation into the Canadian blood scandal, these pharmaceutical companies could have caught as many as 90 percent of hepatitis C cases with a simple test. In a 2013 interview, Francis blamed the tragedy on the lack of a national blood policy. At the time, Canada’s blood donations were almost entirely managed by the Canadian Red Cross, which was later fined $5,000 during the federal inquiry into the scandal for failing to adequately screen they distributed. After the inquiry ended in 1997, Canada set up two government-adjacent agencies to prevent it from happening again.

In the U.S. at the time of the scandal, the National Institutes of Health was in charge of the blood supply, but control was shifted to the Food and Drug Administration in 1972. Currently, the FDA recommends against taking blood donations from individuals who have engaged in prostitution or taken nonprescription drug injections, and controversially, from men who have had sex with other men within the past year. The restrictions have one goal: to prevent people who have been exposed to blood-borne diseases from giving blood, as screening, clearly, isn’t always thorough.

To be extra safe, the American Red Cross and American’s Blood Centers perform laboratory tests for every unit of blood donated, testing for a laundry list of diseases including Chagas disease, hepatitis B and C, HIV type 1 and type 2, human T-lymphotropic virus, syphilis, West Nile virus, and herpes.

While the premise of Unspeakable seems like a distant past, its repercussions are still being felt today. As the New York Times notes, Britain’s current investigation into the scandal will revisit old accusations that the country’s taxpayer-funded National Health Services destroyed evidence that it had allowed tainted products into the system and failed to remove the contaminated blood once it was identified. In the Guardian, Kat Lanteigne, executive director of BloodWatch, a safe blood advocacy group, noted that the blood systems in Canada and the UK have recently reopened their doors to private companies, suggesting that the Unspeakable may very well happen again.

More like this
Science
Jan. 21, 2023
A deadly fungal plague swept the world of The Last of Us — is it realistic?
By Tara Yarlagadda
Science
Jan. 12, 2023
Soyuz rescue plan and more: Understand the world through 8 images
By Robin Bea
Science
Jan. 21, 2023
Plague study complicates a commonly held belief about the Black Death
By Samuel Cohn, Philip Slavin and The Conversation
LEARN SOMETHING NEW EVERY DAY.
Related Tags
Share: