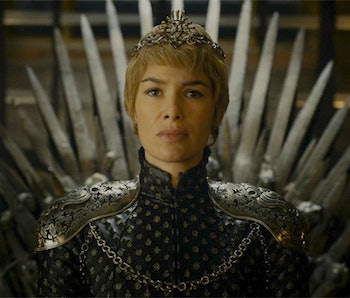 Even the most casual ‘Game of Thrones’ fan can tell you that Cersei Lannister is hell-bent on revenge for the deaths of her children.

Sunday’s episode of Game of Thrones gave Cersei another chance to show off her imaginative capacity for cruelty.

Spoilers for Game of Thrones season seven, episode three are below. Read on, nerds.

In this week’s episode, Euron Greyjoy delivered his priceless gift to Cersei: Sand Snakes Tyene Sand and her mother, Ellaria, two of the four women responsible for murdering Cersei’s only daughter, Myrcella Baratheon. In the episode, titled “The Queen’s Justice,” Cersei approaches Tyene and Ellaria, who are chained to opposite walls just out of reach from each other. After taunting them, Cersei kisses Tyene on the lips, revealing that she had coated hers with a poison called The Long Farewell — exactly how Ellaria killed Myrcella in a past season. Cersei then drinks the antidote and leaves them behind, telling Ellaria that she will remain in the dungeon for as long as it takes for her daughter to decompose.

“You will live to watch your daughter rot,” Cersei tells her. “To watch that beautiful face collapse to bone and dust.”

Part of the punishment, it seems, is to be left wondering just how long that might take. According to the disturbing amount of research out there on human decomposition rates, Ellaria will spend quite a bit of time locked up in the dungeons of the Red Keep watching her daughter decay until just a skeleton remains.

Most scientific analyses of human decomposition involve burial in soil, or at least placing the body on top of it, so they don’t quite apply to the situation at hand. However, they still reveal a couple of things. First of all, decomposition is fickle, and a number of factors come into play, like body weight and fly infestation.

Fortunately, scientists have also examined decomposition beyond what happens with soil and bugs. When bodies are left in the open, the biggest factor is temperature. Researchers have arrived at the equation Y=1,280/X, where “Y” is the amount of days it takes for a body to skeletonize, and “X” is the temperature in Celsius. This was put to the test when it was found that the corpse of a woman decomposed to a skeleton after just one week of being left in the heat — the fastest rate of decay documented thus far.

This leaves us with one mystery: What’s the temperature in the dungeons beneath King’s Landing? Most of the outdoor King’s Landing scenes in Game of Thrones are filmed in Croatia, which has an average winter temperature of about nine degrees Celsius. And experts say that in the winter, the interior of a castle can be about ten degrees warmer than the outdoors, meaning we can assume that Tyene and Ellaria’s cell is about 19 degrees Centigrade.

That decomposition equation says it should take about 67-and-a-half miserable days for Tyene’s body to decay so much that nothing but a skeleton remains.

But that leaves us with the poison; The Long Farewell could live up to its name and potentially add days to the sentence.

When asked how long it will take for Tyene to succumb to the poison, Qyburn mysteriously says, “Difficult to say. Hours, days, it depends on the subject’s constitution.” However, the other three characters to fall prey to the long farewell all started to show symptoms within a few hours, even when they were calm and collected. Therefore, we can assume that barring some sort of rescue, Tyene Sand will be dead after about a day and Ellaria’s sentence will last just shy of ten weeks.

If you have a strong constitution of your own, you can watch the scene below.

More like this
Science
11 hours ago
If Alien Life Exists on an Ocean World, It May Follow These Chemical Rules
By Kiona Smith
Science
Jan. 29, 2023
Studying ancient human DNA has unlocked our origins — but the ethics are hazy
By Emiliano Rodríguez Mega and Knowable Magazine
Science
Jan. 29, 2023
Are coyotes dangerous to dogs and cats? Here’s how to keep your pets safe
By Tara Yarlagadda
LEARN SOMETHING NEW EVERY DAY.
Related Tags
Share: