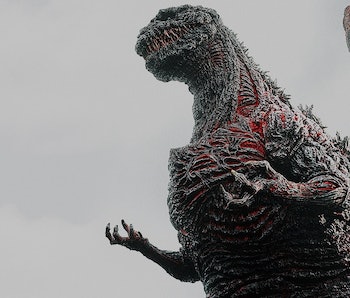 Nearly ten months after a brief two-week run on American big screens, Shin Godzilla is finally available to stream, and will be released on Blu-ray on August 1. It’s a big moment for kaiju fans, whether they’re re-watching the movie or seeing it for the first time.

The Blu-ray and DVD, which come with extras that include trailers and interviews, are on sale at Amazon. The internet superstore also has the movie for streaming devices. The Blu-ray is also available at Best Buy and other fine retailers.

The film is a complicated one, for many reasons. Shin Godzilla marks the latest reboot from Toho, the Japanese movie studio that has guided the monster through 29 movies over the last 63 years. The franchise has changed along with the culture and politics of Japan, and the new film reflects the seismic shifts felt in the country since the last Godzilla movie, Final Wars, which came out in 2004.

The movie, directed by Hideaki Anno, is more political than any previous Godzilla movies, which have, for the most part, preferred to sneak in political and cultural commentary in subtle ways. Shin Godzilla, on the other hand, is overtly about the government, its response to catastrophe, and Japan’s military.

“The film shows the divide between. the old generation — who it suggests are washed up and don’t know how to handle a crisis — and the younger and more idealistic generation,” Steve Ryfle, the author of the Godzilla encyclopedia Japan’s Favorite Mon-Star and a book about original Godzilla director Ishiro Honda, told Inverse last year. “The young people are shown to have learned from the mistakes of their forefathers and also to have a more positive, proud attitude toward their country. They are willing to do anything to save it.”

Just as the original 1954 film was inspired by the atomic bombings of Hiroshima and Nagasaki, Shin Godzilla alludes to the Fukushima nuclear reactor meltdown, which rocked the country in 2011. The film is just as much political satire as it is a monster movie, as it mocks old government bureaucrats who can’t get out of their own way. As Godzilla morphs from gigantic eel-like creature to massive radioactive monster that devastates Tokyo, government higher-ups waste time with endless meetings and silly bickering.

It’s a direct commentary on the inept response that a corrupt Japanese government mounted after Fukushima. But it’s also an endorsement of the campaign being mounted by President Shinzo Abe to adjust the constitution to allow Japan to keep a larger standing army, which has been banned since World War II. Japan’s Self-Defense Forces are limited in their capability, but in Shin Godzilla new weapons are key. It is also a portrayal of a strong Japan pushing back against a nuke-happy United States, which has long dictated the terms of the alliance.

Godzilla evolves quickly through the film’s two-hour run time, going from hunched, mutated dinosaur tadpole to a radioactive behemoth that’s clearly in pain at all times. In all, there are [five versions of this monster](http://godzilla.wikia.com/wiki/Godzilladesign(2016_film)), each of them scarier than the next.

Ultimately, Shin Godzilla boasts the biggest version of the King of the Monsters yet. The radioactive iteration stands at 118.5 meters tall, a full 10 meters taller than the version in Legendary’s 2014 movie. The original Godzilla was just 50 meters tall.

Shin Godzilla was a smash hit in Japan, which was clearly ready for the return of its mightiest monster. It made over $75 million at the box office there, making it the number one live-action film of the year. It also became the most lucrative film in the entire franchise.

Not only was it a box office success, but the movie also won over critics and Anno’s fellow filmmakers. (It even had a cameo from legendary director Kihachi Okamoto. Shin Godzilla would go on to win seven trophies at the Japanese equivalent of the Academy Awards, the Japan Academy Prize, which included Best Film and Best Director.

And no, it still doesn’t answer whether or not Godzilla has a penis.