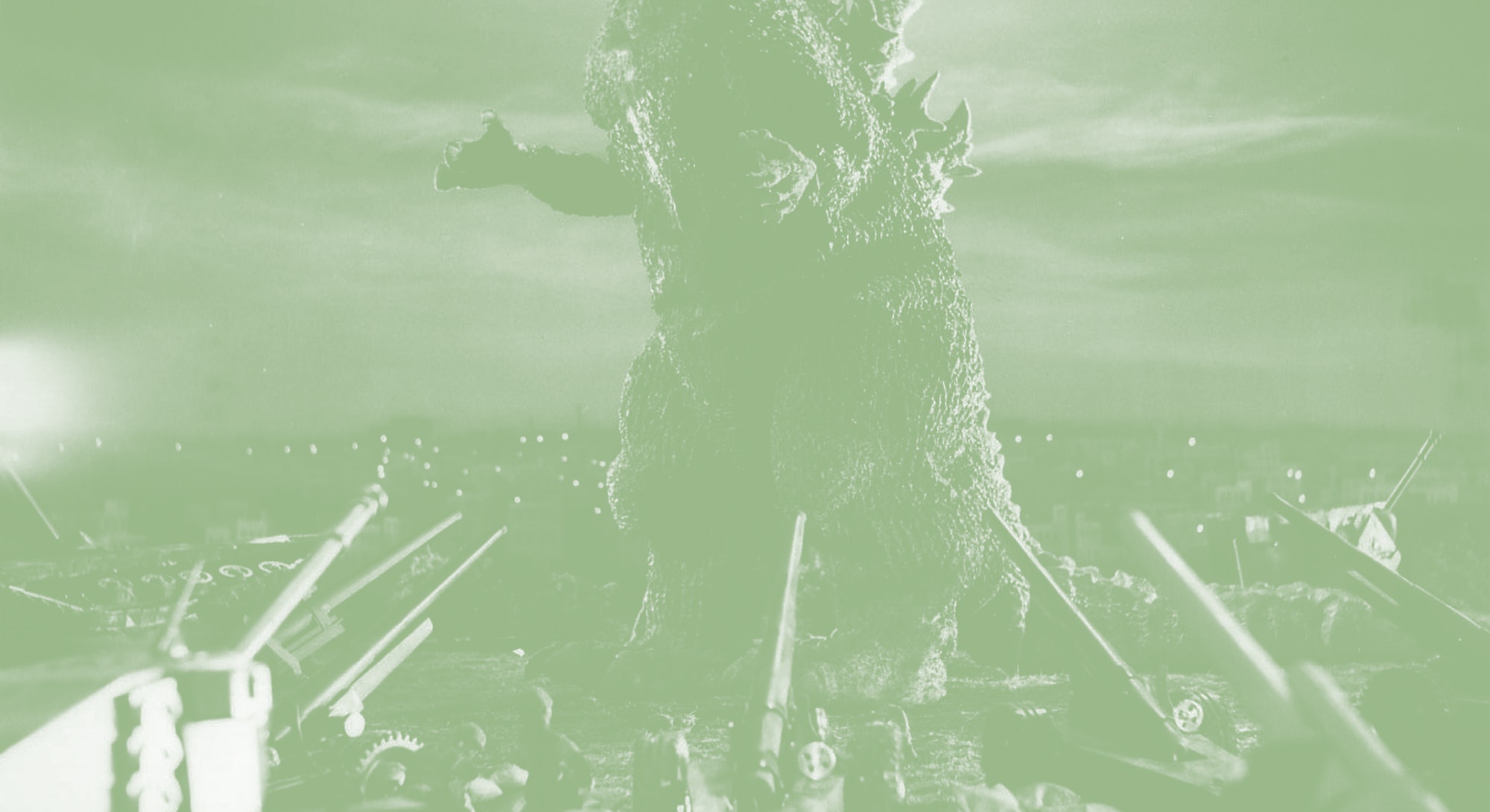 Think about it: If Godzilla is aware of man’s ability to love and have sex, but can’t do it himself (blame American translations and Roland Emmerich for our assumption that Godzilla’s a dude), wouldn’t that upset him? Since his debut in 1954’s Gojira, many experts have studied the legendary movie monster, and given serious thought to the mysteries of the big guy’s anatomy.

So: does Godzilla have a penis?

“Yes, Godzilla has a penis,” asserts writer and Godzilla expert Shyaporn Theerakulstit, pop culture pseudo-science expert who has given lectures on Godzilla’s biology for panels at the Smithsonian and TEDx. Theerakulstit likens Godzilla’s biology to that of most reptiles, pointing out his hemipenal bulge at the base of the tail below the belly. “If you look at pictures of this area on Godzilla, you will notice said bulge.”

The company line, however, is that such anatomical specificity is off-limits.

“When you’re working for Toho, it’s just not a concern, you don’t even think about it. It’s not part of the design,” explains Matt Frank, the comic book artist for IDW’s ongoing Godzilla comic book series. “The design of Godzilla, Toho has to approve. You can’t just have a hanging schlong out there.”

But there have been few times that Godzilla’s schlong has at least been referenced.

“There are a couple of pornographic comics that are official,” recalls Toho Kingdom blogger and Kanda University instructor Nicholas Driscoll. “One of them is a parody comic, Gojira Shin Kigeki (in English: Godzilla New Comedy), in which scientists are trying to stop Godzilla, and they create enemy Godzillas from his cells. One of them creates a cancer Godzilla. One creates a white blood cell Godzilla. The last one is made from Godzilla’s sperm. They don’t go into how they got the sperm, but it’s a stupid-looking sperm with Godzilla’s head, basically.”

In 1985, an obscure Dr. Pepper commercial, tied to the Godzilla reboot released in Japan that year, featured Godzilla falling in love with a clearly feminine kaiju. To Frank, this is a misunderstanding of the kaiju mythos.

“The whole idea is that kaiju are inherently mysterious. If you know everything about them, they cease to be kaiju,” Frank explains. “The term means mysterious beast, it means something unquantifiable. That’s the thing Toho really stipulates nowadays. We can’t really know everything about Godzilla. We’re not even certain what he eats aside from radioactive energy. Unless it’s a specific part of the story, [to know more] flies in the face of everything kaiju.”

Godzilla’s complicated continuity — some of his movies are rebooted sequels that start their own parallel timelines — make much of the monster’s story canon up for debate. Dr. Bill Tsutsui, president of Hendrix College in Arkansas and author of Godzilla on My Mind: Fifty Years of the King of Monsters, agrees that Godzilla is complicated but does not think that Godzilla is any specific kind of mutated amphibian. As such, Godzilla may not necessarily have that hemipenal bulge, as Theerakulstit posits.

“That is one of those great mysteries of Godzilla,” Tsutsui told Inverse. “In many films there [are] scientists speculating how Godzilla works internally. I don’t think there’s ever a definitive statement about Godzilla being biologically akin to any amphibian we now know.”

Theerakulstit, on the other hand, believes there is no doubt about the matter, based on the canon established by Gojira and picked up again in the ‘80s. In that original film, Professor Yamane postulates Godzilla is a mutated therapod from the Cretaceous period that survived millennia in underwater caves. Triggered by the nuclear tests at Bikini Atoll, the therapod became Godzilla.

“Some believed it was the Abelisauridae, others speculated it was Ceratosaurus due to the armor plates along its back,” says Theerakulstit. “However, Yamane was correct when he theorized Godzilla was from a transitional dinosaur form, as was confirmed in 1991 upon the discovery of the Godzillasaurus,’ a specimen which survived on Lagos Island [in the film Godzilla vs King Ghidora]. It shortly mutated into a fully grown Godzilla.”

So Godzilla may definitely have a penis, though we can’t be sure. But let’s assume, for a moment, that he does indeed pack heat. Can he use it? And does he just need a good shag to get rid of the pain of being a monster born of atomic warfare?

“I’m afraid your hypothesis is based on a faulty notion,” Theerakulstit grimly states. “Godzilla’s rages are fueled by humanity’s tendency to blow up nuclear weapons next to Monster Island.”

Theerakulstit also suggests that female kaijus (if Godzilla swings that way) may be bigger and more fearsome than any Godzilla we’ve seen, given that female lizards are bigger than their male counterparts. That would make for an absolutely gigantic kaiju; Gareth Edwards’s Godzilla from 2014 and this years Shin Godzilla have the monster just under 400 feet tall, which would tower over the Bank of America building in Manhattan.

“This sexual dimorphism explains why the female specimens never wander beyond territory, as they probably are less distracted by noises and shiny things than their male counterparts,” he says.

So maybe Godzilla isnt looking for a sexual relationship, but what about something more meaningful, like love, as suggested in the Dr. Pepper commercials? Dr. Tsutsui agreed that Godzilla is, in fact, an emotional creature.

“It is implicit in the Japanese films that Godzilla is thinking and caring,” he says. “It is in contrast with the American Tri-Star Godzilla, depicted as an animal driven by instinct.”

Godzilla’s American rival, King Kong, has demonstrated affection and desire by taking damsels for dates on the Empire State Building. But Godzilla has been chaste, favoring deeper connections like guardianship and family. While Roland Emmerich’s 1998 monstrosity starring Matthew Broderick is regularly mocked by fans, a crucial plot point added reproductive wrinkles to Godzilla lore: The film posited that Godzilla can reproduce asexually.

“What in a Japanese film might be portrayed as affection for offspring, in that [Roland Emmerich] movie is portrayed as instinct that is less human than sort of the mother bear swatting anything near its young,” Tsutsui says. “In the Japanese films, this is a monster that does have feelings. Whether love is one of them, that connection and defending human beings, is part of the question.”

Long before Godzilla had an asexual offspring in 1998, he had a son in 1967’s Son of Godzilla. A decade after Godzilla made his debut, his image as a horror icon loosened into an avenging sci-fi hero, and in Son of Godzilla he was given a son. Named Minilla (Godzilla Jr. in English translations), Godzilla fans remain doubtful over Minilla’s origins.

“There is no area more gray than how [the] son of Godzilla appeared,” Tsutsui comments. “We know there was an egg. We know a small, misshapen monster appeared from that egg, which doesn’t look that much like his dad. But we don’t know how that egg got there, what Godzilla’s role in producing it was.”

Its doubtful the filmmakers of a ‘60s monster movie considered the speculative science of atomic lizard reproduction, but as Dr. Tsutsui suggests, it’s plot holes like these that have kept geeks debating for decades. “I don’t know how to tell a male lizard from a female lizard to begin with,” he admits, “but it really is as much about what you want to read into Godzilla’s personality.”

Driscoll thinks something happened off-camera. “The previous movie, Godzilla vs. The Sea Monster, Godzilla kind of awakens to females,” he explains. That movie was written as a King Kong movie, and King Kong likes girls. There’s a scene where Godzillas checking out the main babe. He’s staring, rubbing his nose, and its bizarre because Godzilla never does that in other movies. I imagine his lust awakened, then finds a real Godzilla girl, makes Minilla in-between.”

Which brings us back to the question of Godzilla’s biology, though we’re less concerned with his theoretical monster than his internal reproductive organs.

Theerakulstit has another theory, one rooted in harder science. “It is generally accepted Minilla is a pre-adolescent Godzilla. He resembles Godzilla morphologically and the senior exhibits parental habits similar to crocodiles and birds,” While Threeakultsit says no scientist “has witnessed a Godzilla mating, gestation, or egg-laying,” he’s confident that his mutation theory covers any doubts.

Birds and reptiles, which are closely related to dinosaurs, reproduce sexually. Dinosaurs have been shown to possess medullary bones, a type of bone found in birds used to store extra calcium for egg production. Like birds and reptiles, dinosaurs lay eggs, as well as build nests. And since Godzilla has evolved from a dinosaur, we can infer Godzilla reproduce sexually. And with that established, we can understand why Godzilla and Minilla seem to have a real connection.

“The two are able to communicate and the younger has similar energy projections to Godzilla,” Theerakulstit adds. “Minilla was hatched from an egg prematurely on Solgell Island. It is unlikely some form of brood parasitism occurred which tricked Godzilla into caring for another species’ offspring.”

Ultimately, we may never truly know much about Godzilla’s love life, though Driscoll once explored possible candidates at Toho Kingdom. Still, it doesn’t make for a thrilling monster movie to see Godzilla break for lovemaking, but more importantly, maybe we’re not meant to understand.

“Godzilla came from a certain historical context, and speaks to the Japanese people in a different way than it speaks to us,” Tsutsui says. A Japanese-American who grew up in Texas and attended Harvard and Princeton, Dr. Tsutsui admired Godzilla as a child and used the movie monster as a bridge to his own culture and a launching pad for a career as a historical lecturer.

“People in the rest of the world can love Godzilla, but I think it touches different buttons for the Japanese than it ever will for us,” he says. [He is more] than just a big lizard walking through Tokyo, but about some fundamental questions of Japanese society and culture.”

When I asked him if Godzilla has a dick, he laughed.

“To my knowledge, no, but we don’t have that kind of relationship.”