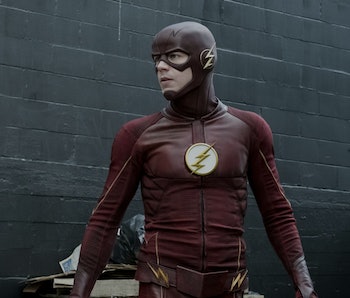 A new season may mean a new costume for The Flash. Over the weekend, actor Grant Gustin shared a chill photo from the set of the DC TV series, currently filming its fourth season in Vancouver. In the picture, he’s wearing snazzy new boots that have a V-shaped gold trim. Eagle-eyed fans and cosplayers may be aware that this gold trim was not present in prior costumes, which can only mean that Barry Allen is getting new duds when he returns from the Speed Force.

The photo, which Gustin posted to Instagram, is a mirror selfie of himself, half-suited up, with his legs kicked up in what is (presumably) his trailer from the set of The Flash. Gustin also accompanied the photo with a vague, nondescript caption: “Season 4. #TheFlash.”

But take a closer look at his boots: There’s a new V-shaped trim that wasn’t there before. These are new boots, which can only mean fans of The Flash are in for a new suit when the show returns this October. Gustin’s photos only confirm the speculation, which have been fueled by paparazzi photos which show Gustin in a new costume.

Last season on The Flash, in the episode “The Once and Future Flash,” Barry Allen traveled to the future and met his older self, who wore a new Flash costume with gold trims on the boots, gauntlets, and a new gold belt. This costume seen in the paparazzi photos strongly resemble Future Flash’s outfit, which can only mean that the Flash is on his way to fulfilling his destiny. And he’s going to look great.

See for yourself. Below is a photo of the Flash from last season, in the episode “Attack on Central City.”

The Speed Force really does change speedsters, doesn’t it?

The Flash returns on October 10 on the CW at 8 p.m. Eastern.