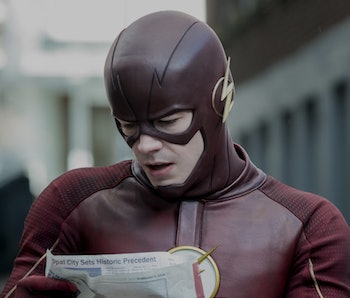 Last season on The Flash, Barry Allen (Grant Gustin) hastily sacrificed himself to the Speed Force to prevent a storm from destroying Central City. This left the Arrowverse without a Flash, but not for long. Ol’ Barry will return right in the first episode of the show’s upcoming fourth season. But he may not be exactly himself when he’s back, which can only spell trouble for him and his beloved Iris West (Candace Patton).

“The way I see it is, time is nonlinear and everything is happening at once in the Speed Force,” Gustin told Entertainment Weekly in a new interview. “In some ways he’s had an awakening and he’s had a rebirth. Our first episode is called ‘Reborn,’ and it is a rebirth for Barry, but he’s kind of scrambled, too, because he’s experienced so much so quick over the course of six months, even though for him it was an eternity. He’s not Barry when we see him for the first time.”

And Barry being himself may not go well when he reunites with his now-twice former fiance, Iris. “There’s going to be some trust issues,” Patton said about Iris’s relationship with Barry in Season 4. “He left and didn’t really ask her or discuss it with her. He just kind of does things and comes back and says, ‘I hope you’re okay with that.’ They’re going to have to really work on their relationship before they actually tie the knot — if and when he comes out. There’s going to be some work that needs to be done before they actually put rings on each other’s fingers.”