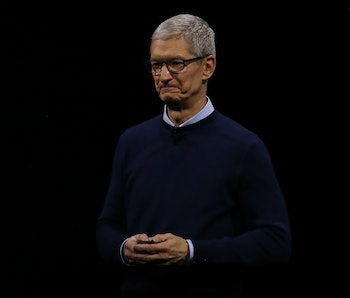 Without mentioning his name directly, Apple CEO Tim Cook spoke out against the decision announced by Donald Trump Wednesday to try to ban transgendered people from the military.

“We are indebted to all who serve. Discrimination against anyone holds everyone back. #LetThemServe,” Cook shared at 3 p.m. Eastern on his Twitter account.

This statement came as a response to Trump’s earlier tweets, in which he announced the reinstatement of the ban and revealed the logic behind it. The three tweets Trump issued read as a continuous statement that has already sparked discussion about what qualifies someone to serve their country:

“If hearing that the CEO of Apple is gay can help someone struggling to come to terms with who he or she is, or bring comfort to anyone who feels alone, or inspire people to insist on their equality, then it’s worth the trade-off with my own privacy,” Cook said in his editorial, titled Tim Cook Speaks Up.

Cook set a powerful example in 2014 when he came out publicly via a Bloomberg editorial. In an interview with Stephen Colbert on The Late Show, Cook said that he felt a “tremendous responsibility” to reveal his sexuality in order to set an example for LGBTQ youth struggling with their own identities.

It appears that Cook once again feels responsible for using his voice, this time to elevate equality in the transgender military service debate.

Apple is the largest tech company in the world, and a word of support from its CEO could make a huge difference to a president as economically minded as Trump. Cook took part in Trump’s tech summit in June, and the president has claimed that Cook promised to build him “three big plants” in America.

In his coming-out statement in 2014, Cook said that “we pave the sunlit path to justice together, brick by brick. This is my brick.”

Other leaders in the tech community have also voiced opposition to this ban. Mark Zuckerberg expressed similar sentiments in a Facebook post, and Google CEO Sundar Pichai tweeted the same #LetThemServe hashtag as Cook in his own statement.