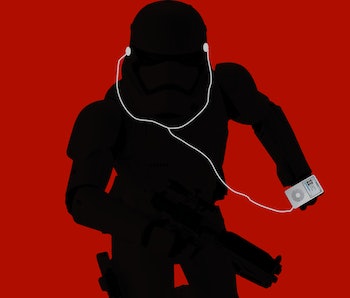 Apple’s sleek, all-white earbuds have left a plenty huge dent in the cultural consciousness, but they still have a ways to go until they are as iconic as the inspiration for their design. Turns out, the look of Apple’s earbuds comes directly from Imperial Stormtroopers from the classic Star Wars films. In other words, you wouldn’t be able to listen to John Williams’s rousing “Imperial March” on your iPod — or any other music, for that matter, but who listens to anything other than “The Imperial March”? — if the Empire didn’t first trample on the civil liberties of citizens in a galaxy, far, far away.

On Wednesday, the Wall Street Journal Magazine published a profile of Jonathan Ive, Apple’s chief designer. As pointed out by Tech Crunch, Ive told J.J. Abrams that his direct inspiration in crafting the design of Apple’s ubiquitous earbuds came directly from the Stormtroopers of Star Wars. According to the WJS, “Ive told Abrams that he had the look of the original Stormtroopers in mind when he designed Apple’s earbuds.” Incidentally, Abrams gives Ive partial credit for inspiring Kylo Ren’s “rougher” lightsaber design in The Force Awakens.

No word yet if any new Apple designs were commissioned by the First Order, including, but not limited to, technical espionage to help track down missing BB droid units, the whereabouts of Luke Skywalker, or the location of the Resistance base.

Apple’s iPhone 9 is set to release sometime in 2018. Here’s everything we know about it.