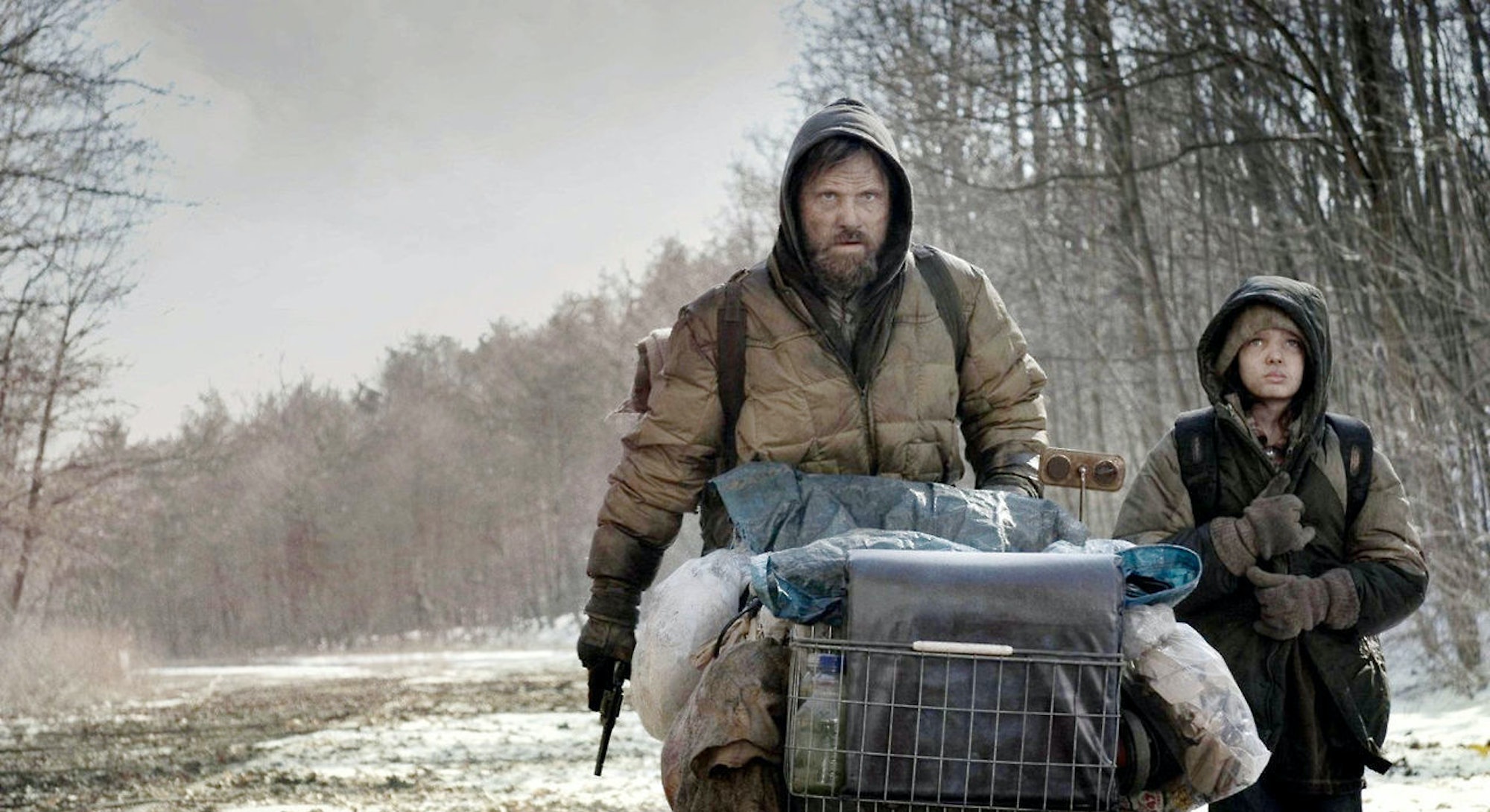 Nuclear fallout, mysterious cataclysms, global disease, zombie pandemics, and asteroids hurtling towards Earth are just a few versions of the apocalypse presented in Netflix’s best movies and shows about the end of the world.

Human beings either do it to themselves directly through dangerous weapon innovations or indirectly by neglecting the planet they should have protected. But in each of these stories, human extinction is a very real threat that the characters face. More often than not, these are cautionary tales meant to make the watchers question their own choices and sense of humanity. When society crumbles and the world is lost, what happens to a sense of human morality?

These stories vary from young-adult tales of bravery amidst dystopian societies to blue-collar workers taking to the stars to save Earth from certain doom. In some cases, science and innovation are key to human survival. But in others, they’re the very source of mankind’s downfall.

The Road, an immensely depressing tale about what happens after the world ends, is based on Cormac McCarthy’s book by the same name. The film stars Viggo Mortensen as a father struggling to survive with his young son after a global cataclysm wiped out much of the world’s population. This dark and bleak tale is more about a crumbling sense of humanity in the wake of a disaster than it is a sci-fi presentation of apocalyptic events. If most of the human population died what’s that mean for humanity?

Six years after a NASA space probe crash-lands in northern Mexico, a huge area of land is under quarantine as the U.S. and Mexican militaries do battle with mysterious alien creatures that come into existence. Their nature and intentions are entirely unclear, but director Gareth Edwards minimalistic approach to the alien monster genre help him land the 2014 Godzilla film. Monsters is a story of survival and desperation that remains one of the best and most frightful films on Netflix.

Armageddon never bothers to answer why it makes more sense to teach drillers to be astronauts than vice versa, but that’s part of its enduring charm. Bruce Willis, Ben Affleck, and Liv Tyler star in a film about humanity’s best efforts to avert global disaster as a massive asteroid hurtles towards Earth. Salt of the Earth oil drillers are tasked with flying out into space to drill into the asteroid and explode it from within. It’s a thrilling classic from the late-’90s.

The cultural impact of AMC’s massive zombie TV hit, The Walking Dead, is impossible to ignore when it comes to apocalyptic media on Netflix. Around a month after Sheriff Rick Grimes winds up in a coma following a grisly shootout in Georgia, he wakes up to a world overrun by zombies that becomes a war for survival against more threats than just the undead. The wildly popular series continues into its eighth season this fall with its spin-off Fear the Walking Dead moving towards its third season. Netflix currently has six seasons of the show, and the seventh might come out sometime early this fall.

This Brazilian dystopian thriller is a curious YA-style mixture of The Hunger Games with the likes of The Giver or Divergent. Much of the world lives in abject poverty, but 3 percent of the top-scoring 20-year-olds get to go to the Offshore, where the brightest that society has to offer get to live in luxury. The show follows the young students going through the battery of testing, struggling to make it to an island paradise. The pressure and stakes are insurmountable, with the alternatives just as horrifying.

Perhaps The CW’s best non-Arrowverse program, The 100 feels like a YA dystopian drama with a hard sci-fi premise. Following the nuclear apocalypse, a portion of humanity took to a series of connected space stations to survive the radiation. Almost a century later, supplies are diminishing, and a group of 100 delinquent children is sent down to test survivability on Earth’s surface. What they find is a planet with treacherous terrain, a few horrific monsters, and — against all odds — savage, surviving humans. The A-plot on the ground of Season 1 feels like Lord of the Flies, whereas the B-plot on the space station feels remarkably like Battlestar Galactica. While The 100 stumbles a bit in Season 2, it remains a solid option for contemporary sci-fi as the show evolves moving forward.

A Netflix original anime film, Blame! is based on the beloved manga by Tsutomu Nihei set millennia into a future where A.I. machines have overrun human existence. Humans built machines to serve them, but centuries ago, something went haywire, causing the A.I. systems of an ever-expanding City to treat humans as parasites. Now, a lone gunman wanders a massive, endlessly replicating labyrinth in search of the one thing that could fix the computers and restore order to a lost world.