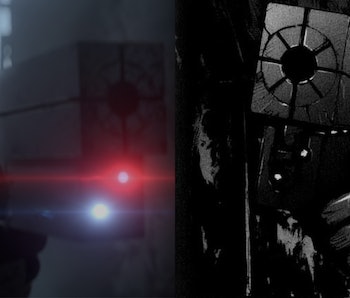 Tsutomu Nihei’s sci-fi manga Blame! introduced readers to an endless, labyrinthine horror of a cyberbunk landscape. Though it has elements of a spaghetti Western, its closest analog is Mad Max: a lone gunman of few words wanders a wrecked landscape, has one-off adventures that leave many dead in his wake, and then moves on to the next location to repeat the cycle.

And yet, the movie version of the show is much more narrow in scope. But that’s actually a good thing: In choosing to hone in on one isolated storyline, the feature-length Blame! anime adaption on Netflix succeeds where the manga fails.

The manga follows its protagonist from one adventure to the next, cutting into long periods of quiet movement with explosive action scenes. Though Blame! does a spectacular job of building an intriguing world where A.I. robots are at the top of the food chain with the remnants of humanity being hunted down in an endlessly replicating city, the story is an incoherent mess.

With a weapon called the Graviton Beam Emitter capable of vaporizing miles of steel in a single shot, the protagonist Killy wanders in search of a human with the Net Terminal Gene. With it, humans might be able to retake the city and regain control over their robotic overlords after millennia of barely surviving.

The geography of what characters call the City is incomprehensible, and panels like the one above communicate this to great effect. The world itself seems awe-inspiringly big, but the linear aspects to the story struggle to become anything cohesive.

Each chapter shows Killy making his way through black-and-white panels that in most cases are indistinguishable from the ones immediately before. The reading experience creates a pervasive mood of desolation and loneliness that, oddly enough, makes the world come alive.

It’s often disorienting when Killy gets in a fight. Sometimes he falls for an indistinguishable amount of distance or gets thrust into an entirely new area. Then he’ll walk miles up or down at the beginning or end of a chapter before coming across an entirely new kind of human, robot, or cyborg. Often, you learn a new character’s name, only for them to die panels later, and Killy just moves on. There isn’t time for the reader or Killy to form any kind of attachments.

But the recently released anime film adaptation of Blame! succeeds in mixing up the format of the manga entirely. Instead of following Killy’s measured movements through long stretches, he’s instead sidelined as a mysterious savior with little to no personality.

The story cherry-picks elements from the manga to create a cohesive narrative that works as a self-contained story. If it weren’t for its recycling of several characters from different segments of the manga, the film might even work within the continuity of the manga.

The focus shifts away from Killy and towards a colony of “Electrofishers,” humans who use powered armor and bolt rifles to fight the Safeguard Exterminators they encounter, terrifying spider-like humanoids designed to overwhelm and kill all humans.

Netflix’s anime film adds some much-needed color to the world of Blame! while staying true to the ancient and weathered industrial aesthetic of the anime. It takes only what it needs from the source material to construct something entirely different.

Though the anime ends just like any other chapter of Blame! — with Killy moving on to pursue his seemingly endless quest — at least it offers a full storyline with a satisfying conclusion in the process.