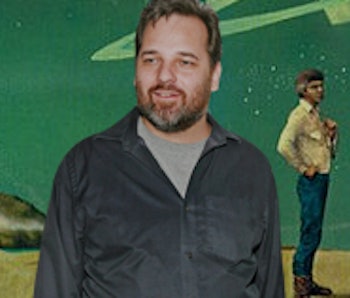 Dan Harmon, co-creator of Adult Swim’s hit sci-fi animated series Rick and Morty, has just been hired to adapt Kurt Vonnegut’s Sirens of Titan for television, and he’s the perfect man for the job.

Though The Sirens of Titan isn’t nearly as widely known or beloved as Vonnegut’s uber-serious Slaughterhouse-Five, it’s still regarded as one of the author’s best novels.

Originally published in 1959, The Sirens of Titan focuses on the supposedly “blessed” Malachi Constant who is the richest man in the world. He uses his luck and wealth to fly himself to Mars in the midst of a brewing war between Earth and Mars. Martians invade Earth, there’s a time-traveling man with his dog, and the ultimate goal for one character is to go to Titan, one of Jupiter’s moons, to check out the gorgeous Siren babes that are supposedly there. It’s a weird ass story that uses bold sci-fi elements to propel itself towards sheer ridiculousness, ultimately asking heady questions about existence, free will, and why people are so shitty.

Harmon first made a name for himself with the cult favorite show Community, but has since seen thriving success with Rick and Morty. What began as a Back to the Future knock-off developed into a zany sci-fi show full of interdimensional travel and wild aliens with a propensity for violence and a sense of humor that deals in Vonnegut’s brand of comic nihilism. Rick and Morty is intelligent low-brow humor about a bumbling grandson and his brilliant alcoholic scientist of a grandfather as they explore the universe. It’s the kind of show Vonnegut might appreciate.

Harmon once told Under the Radar that his version of science fiction borrows more from the likes of Douglas Adams and Kurt Vonnegut than it does anything with “star” in the title. For him, sci-fi is “humor combined with the ability to deal with things as complex as the meaningless of existence given its infinity, but still understand the importance of a hug … It’s like: ‘Sure, I can teleport anywhere at any time I want. Now let’s talk about my girlfriend.’” Anyone who’s ever read a Vonnegut novel knows that the writer’s entire body of work grapples with the meaningless of existence set against the vastness of all of time and space. It’s all a certain brand of comical cynicism that can only function in a weird sci-fi setting.

Dan Harmon gets Kurt Vonnegut, and it’s for that reason he’ll be able to ace The Sirens of Titan TV show.

Producer Evan Katz will join Dan Harmon on The Sirens of Titan series for Universal Cable Productions, but no release date — or even network — has been set.