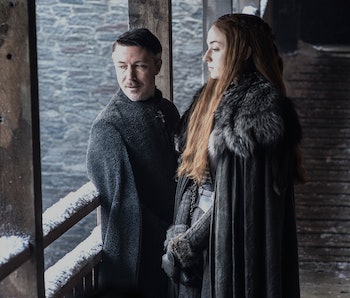 In the Game of Thrones Season 7 premiere, the new King in the North Jon Snow seemed disconcerted by the fact that Sansa seemed to admire Cersei. As it turns out, Sansa is reflecting this in more than just her attitude.

As one Redditor points out, Sansa’s new hairstyle is remarkably similar to how how Cersei’s was in Seasons 1 through 5, when she didn’t have it elaborately braided or cut off for her Walk of Atonement.

Cersei wore it long and flowing with the top pulled back, just as Sansa is now wearing hers in Season 7. Granted, this seems to be the default Westerosi hairstyle for women when they don’t elaborately braid it. Catelyn Stark wore hers in a similar style when it wasn’t pulled back, as did Margaery Tyrell. Even Daenerys Targaryen donned a similar style in Seasons 1 and 2.

Still, the show has previously used character aesthetics to draw parallels on purpose. For her part, Arya Stark is wearing her hair similar to now Ned wore it in Season 7.

Here’s the photo of Sansa and Cersei with a side-by-side comparison:

Sansa has had perhaps the most dramatic hairstyle transformations of any character on Game of Thrones, save for Jon’s infamous transition from mop to man-bun. In the past, Sansa has styled it both to blend into her environment and resemble the women who have the greatest influence on her, from her mother to Margaery Tyrell.

In the Season 7 premiere “Dragonstone”, Sansa admonished Jon for focusing on the Night King more than the threat of Cersei. “Everyone who has ever crossed her — she’s found a way to murder,” she explained. Looking taken aback, Jon said, “you almost sound as if you admire her.”

Sansa said, “I learned a great deal from her.”

The height of their relationship was of course Cersei’s “pep talk” to Sansa during Season 2’s the Battle of Blackwater, as the women and children sat inside.

Let’s hope Sansa learned more from Cersei’s ability to get what she wants and less from her dangerous, deadly methods.