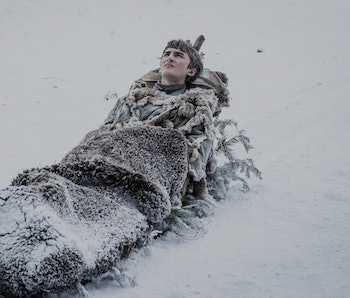 Arya Stark opens Season 7 of Game of Thrones by murdering an entire room full of Freys — but her brother Bran may have caused more damage with his brief appearance.

In the Season 7 premiere, “Dragonstone,” Bran Stark only appears in one short scene. Along with his companion Meera Reed, he arrives at Castle Black, where he has a brief interaction with Dolorous Edd. The new Lord Commander asks for proof that Bran and Meera are who they say they are. Bran tells Edd that he battled the White Walkers at Hardhome. Convinced of his identity, Edd and his fellow Night’s Watch brothers let Bran and Meera into Castle Black.

Why does this mean Bran probably screwed over Westeros? Remember back in Season 6, Bran Stark met the Night King in one of his visions. The Night King touched him, essentially placing a tracking device on Bran. Because of that, the army of the dead found him at the Three-eyed Raven’s cave. This lead to the deaths of the Three-Eyed Raven, Hodor, and Bran’s direwolf Summer.

Now that Bran is at Castle Black in Season 7, the Night King and the army of the dead can find him at the Wall, take out the Watchers on the Wall who protect the Seven Kingdoms from their kind, and maybe even breach the barrier.

Earlier in the episode, Bran sees the army of the dead walking with a giant wight. It’s unclear exactly where they are, but it looks like they’re south of the Wall. It’s also unclear when this is happening, since Bran can see the past and the future. After all, he saw glimpses of the explosion at the Sept of Baelor before Cersei blew it up in Season 6.

If the army of the dead makes it past the Wall in Season 7, it’s entirely Bran’s fault for going to Castle Black when he has a White Walker tracking device. His cousin Jon Snow might be branded as the one who “knows nothing,” but it looks like that slogan is attributed to the wrong family member.