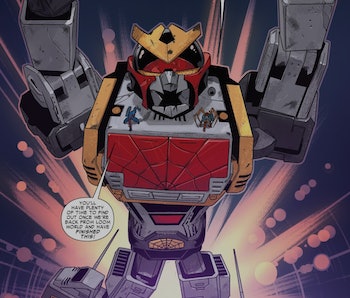 In just under a year, the heroes of the Marvel Cinematic Universe will be at war with Thanos, when Avengers: Infinity War hits theaters on May 4. As the big bad of the MCU becomes nigh-unstoppable thanks to the all-powerful Infinity Stones, the Marvel superheroes will do whatever it takes to stop him. So it’s sort of bizarre that Tony Stark, the billionaire industrialist and futurist with a knack for robotics and predicting Thanos’s rise, hasn’t already built a giant robot for his new pal Spider-Man.

In the late 1970s, Marvel tried to expand its brand around the world, through global licensing. Through Stan Lee, Marvel entered a partnership with Toei, a film and TV studio from Japan that created its own franchises like Kamen Rider and Super Sentai. In 1978, Toei produced its own take on Spider-Man in a new series, simply titled Spider-Man, which reimagined the web-slinger as a motorcycle racer named Takuya Yamashiro (played by Shinji Todo).

Instead of being a nerdy teenager, Takuya was a bit older and a little cooler. Instead of wearing a sweater vest and glasses, Takuya wore varsity jackets and had a sweet haircut. And instead of being bitten by a radioactive spider, Takuya had been injected with blood from the last warrior of the Planet Spider, which gave him powers and control over a giant robot, Leopardon. Eat your heart out, Peter Parker.

Giant robots are a staple in Japanese pop culture, having first been made popular by influential mangas and shows like Tetsujin 28-go, Johnny Sokko and His Flying Robot, and Gundam. So Leopardon’s inclusion made sense in Spider-Man, and helped sell toys and keep children interested. And it sort of worked: Although Toei’s Spider-Man lasted just one season, it aired a whopping 41 episodes, as well as a half-hour movie. Stan Lee himself has expressed admiration for the show. Takuya may not have been Peter Parker, but who’s to say his Japanese version isn’t family?

Anyway, Tony Stark should look to Japan and build Spider-Man a giant robot. If not Leopardon, at least a giant robot that Tom Holland’s Spider-Man can integrate with his fancy Stark-made suit. And he has a history doing something like this: Stark — who has taken a mentor role over a young Peter Parker — built the unbelievably sophisticated Hulkbuster, which saved South Africa from a rampaging Hulk in Avengers: Age of Ultron, that makes “giant robot” a logical next-step for him. With Infinity War raising the stakes, it would be a major waste if Stark didn’t ante up and build a full-blown mecha for the finest battle the MCU will witness.

In 2017, Toei’s Spider-Man is a unique and popular footnote in Spider-Man canon. In 2015, The Amazing Spider-Man writer Dan Slott featured Leopardon in his major crossover book Spider-Verse. Unfortunately, Leopardon was quickly dismantled by the supervillain Morlun. Still, in the Marvel Cinematic Universe, maybe Leopardon can fly high again.