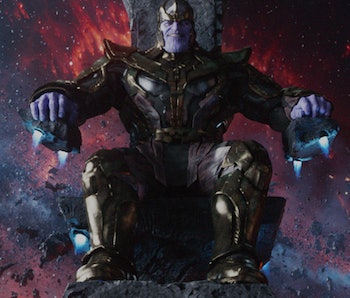 For almost as long as the Marvel Cinematic Universe has existed, Thanos has been sitting back in his purple chair, waiting for the moment to strike. Well, he’s finally standing up in the upcoming Avengers: Infinity war, and it appears he’s getting a new look to go along with his newfound mobility.

Disney, the company that owns Marvel, is throwing its big D23 Expo over the weekend, and an early visitor to the Anaheim Convention Center in California Instagrammed a photograph of a statue of Thanos. Presumably, this is what we can expect the next time he appears in the MCU.

Previously, Thanos has appeared wearing full, golden armor that covers his arms and a helmet. Here, though, he’s not wearing anything on his head, showing off his bad, bald, purple self. There’s nothing on his arms, either, and he’s wearing what appear to be sturdy slacks.

It’s a pared down look, sure, but it seems much more flexible — perhaps something that would allow for more dramatic fight scenes.