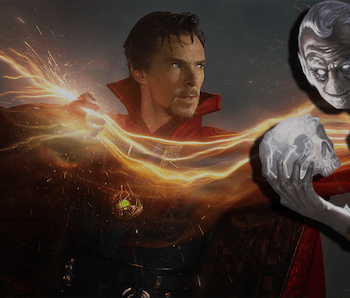 In the upcoming Infinity War, Thanos will finally get up from his throne and take on the Avengers and the rest of the Marvel Cinematic Universe. But, even though the big bad is said to be the main character of the movie, he’s not going to be alone. New set photos appear to have revealed a new villain joining the movie — a cunning and deadly strategist who works alongside Thanos.

Potential spoilers for Infinity War are below.

On Thursday, the website Just Jared published photos from the set of Infinity War. The pictures, which you can check out over on that site, show an actor wearing a CGI motion-capture suit straddling Benedict Cumberbatch’s Doctor Strange. The mocap actor appears to be trying to take Strange’s Eye of Agamotto — one of those Infinity Stones that Thanos is trying so hard to get. The back of the mocap actor’s suit says “EB Maw” on it, leading fans to believe he’ll ultimately be Ebony Maw, the strategist in Thanos’s evil world-razing group of alien killers, the Black Order.

Ebony Maw first appeared in a 2013 issue of New Avengers, and he was assigned to tackle Doctor Strange, much like it appears he will in Infinity War. In that comic arc, he manipulated Strange into summoning a powerful, dimension-ruling demon. Chances are his mission will be a much simpler snatch-and-grab ordeal in the film.