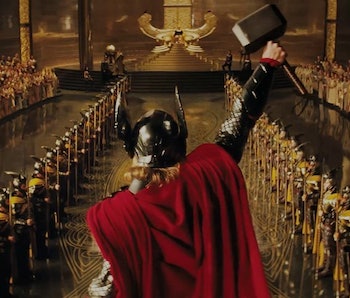 Thor might be an actual Norse god who flies around with lightning powers and a magic hammer, but does that mean he’s deserving of worship? If a Spider-Man: Homecoming Easter egg is any indication, then the answer is yes, because there are entire churches in the Marvel Cinematic Universe dedicated to worshipping the Asgardians.

Regular people in the MCU definitely know that the likes of Thor and Loki exist; they’ve both made extremely public appearances in multiple movies thus far, as did Thor’s companions, the Warriors Three. There have even been Asgardians popping up in Agents of S.H.I.E.L.D., like Elliot Randolph. While Asgardians may have been the stuff of legend, similar to our real-world Norse mythology, before the likes of Thor showed up, it would appear that Asgard came to be worshipped in the MCU.

On July 11, an eagle-eyed redditor, UNITBlackArchive, posted a shot from Homecoming that proves it. It’s an exterior shot of the restaurant that Peter and his Aunt May go to for Thai food. Next to Prachya Thai there’s a large sign on the window that says “Asgard Church” in Korean, with a translation in fine print that reads “Korean Church of Asgard.”

That seems to prove that, at the very least, there’s a congregation of Korean people in New York City who worship Asgardians. Does that mean they pray to Thor? Or to the entire pantheon of Norse gods? Yeah, it’s probably just a fun Easter egg, but think of the implications.

Fans no doubt remember when Black Widow told Captain America early in the first Avengers movie that Thor and Loki were “basically gods.” It would appear that between then and now, Thor has officially been elevated to a “legit god.”

Spider-Man: Homecoming is currently in theaters, with Thor and Spider-Man due for appearances in Infinity War, due out on May 4, 2018.