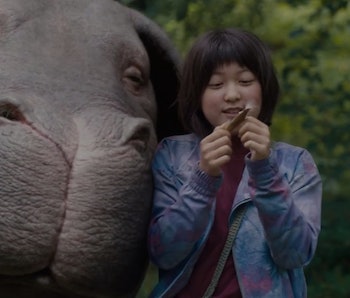 In the new Netflix movie Okja, Lucy Mirando, played by a super-creepy Tilda Swinton, announces that she has figured out how to solve world hunger. Mirando, the new CEO of her family’s corporation, stands in front of a cartoon projection of happy animals as she rattles off statistics on the number of people affected by the world hunger crisis. Starvation will become a thing of the past, she says, because of her brilliant plan to feed everyone with super pigs.

Caution: Mild spoilers for Okja ahead.

The Mirando Corporation sends 26 pigs to different farmers across the world to see who could grow the biggest super pig. Ten years later, in the mountains of South Korea, we see an elephant-sized pig named Okja. At roughly eight feet tall and 13 feet long, she’d probably weigh about six tons.

While Mirando sees her as the next great food source, University of Guelph animal management expert Robert Friendship, Ph.D., sees her as an incredible waste of energy.

“Two sows produce enough offspring in one year to equal your six-ton creature,” Friendship, who has worked in the pig industry for 40 years, tells Inverse. If you’re thinking strictly in terms of meat, he explains, it’s more efficient to grow six tons of pork from normal-sized pigs over six months than from a six-ton super pig in 10 years, he says.

Pigs are already incredibly efficient growers, and they’re becoming more so through selective breeding. Animal husbandry experts measure this by calculating an animal’s feed conversion ratio: the amount of food divided by the amount of meat, or body weight, that’s produced as a result. Using this metric, scientists have determined the optimal weight for currently farm-raised pigs: 260 pounds.

That may seem like a measly amount of pork compared to what Okja could provide, but Friendship explains that there’s only so much actual meat a pig’s bones could carry. Any weight a pig puts on past the 260-pound tipping point is going to be pure fat — which might be delicious pooled under your bacon, but is certainly not the solution to world hunger.

While Mirando’s plan uses genetic engineering to make it possible for Okja to bulk up to an unprecedented size, it fails to address the most important factor when it comes to pig-rearing: resources. Even if it were feasible for the Mirando company to create a six-ton pig, it wouldn’t be the answer to the world food crisis. Whether it lives on a farm or in the wild, a six-ton pig would require an immense amount of feed. For an real pig grow to 260 pounds, Friendship explains, it takes five to six months and roughly 550 pounds of food. That’s a quarter of a ton of feed for a pig that is only only 2% of Okja’s weight.

We can’t say for sure how much food Okja needed to grow to six tons, but we do know it took 10 years for her to get to that size. Not only would farmers need to feed a super pig enough to grow to six tons, they also need to keep feeding the pig for a decade. There’s a reason, after all, that we don’t see that many Okja-sized animals roaming the Earth.

In 2009, researchers from the University of Florida calculated the maximum size of dinosaurs by analyzing the weight and energy expenditures of existing animals. In their article, published in the Proceedings of the National Academy of Sciences, they explained that animals can only grow to the maximum size their bodies will allow if there food sources are readily available. Mesozoic meat eaters, they noted, tended to be smaller than herbivores because live prey was simply less plentiful than plants. Furthermore, another factor that affects size is how much energy it takes for an animal to get its food — further explaining the smaller size of the hunters and the relative enormity of aquatic mammals, which don’t expend as much energy when hunting.

This theory suggests that the giants of eras past were simply too inefficient to survive, paving the way for smaller, less hungry species — like today’s pigs — to dominate.

Today’s domesticated farm animals don’t need to go searching for their own food, so their energy expenditure is much lower than it would be if they were living wild. What this means is that we’re already creating pigs at peak efficiency, and that attempting to create Okja-like super-pigs just to make more meat would be an exercise in waste. That said, efficient rarely means humane, and perhaps Okja, who ran free in the mountains eating persimmons until Mirando Corporation took her back, would have been a happier, albeit less edible, pig than her real-life domesticated counterparts.