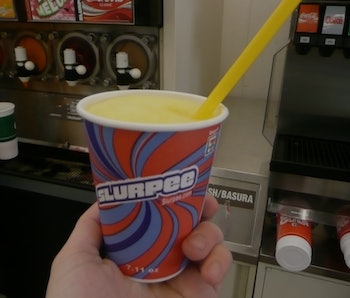 The miracle of 7-Eleven Day — the corporate holiday that takes place every July 11 for the eponymous convenience store chain — is upon us. This is the day where any 7-Eleven customer can get a free Slurpee just by walking in the door. (“Free small Slurpee from 11 a.m. to 7 p.m. at participating stores while supplies last,” of course.)

But the sugary frozen ice drink that’s now a staple of anyone with a self-respecting fast food diet almost died before it reached icon status.

“Our Icee soft drink operation came alive all of a sudden this spring, after we’d almost given up on it,” Don F. Mitchell, America’s pioneering Slurpee impresario told the Dallas Morning News in a 1965 newspaper article under the comically straightforward headline, “Icee Soft Drink Starts Slow, Now Hot Item.”

Mitchell’s official title was Vice-President of the John E. Mitchell Co., Inc., which started the business in 1960 making a “sophisticated device” that cost $3,000 back then — as much as a TK — and could “deliver carbonated drinks of sherbet-like consistency into paper cups.”

But the business couldn’t break even back then as a reported 200-300 dispensers were sold annually in the first five years. Then interest took off: 1,000 machines were sold a year, with 2,000 on back-order.

What saved the Slurpee from an early death? A business plan: Customers were allowed to lease the machines which helped them incubate in the marketplace. Payments were collected over time and new red-and-blue paper cups were delivered. And the amount of the payment was determined by the volume of Slurpees sold: Somebody either counted the cups or a water meter on the Slurpee machine told the story of a Slurped’s popularity.

The leasing plan gave the Slurpee time to flourish and grow in popularity. And in that 1965 article, “7-Eleven in Dallas” was noted as a profitable location. The Slurpee, from almost the beginning, was popular at the “drive-in grocery,” aka the prototypical convince store.

And the rest is (pop-culture) history. There’s the Squishy from The Simpsons:

And there’s “wheeze the juice” from Encino Man — a Pauly Shore vehicle that rested on stereotypes that are now covered in rust — that hasn’t aged as well: