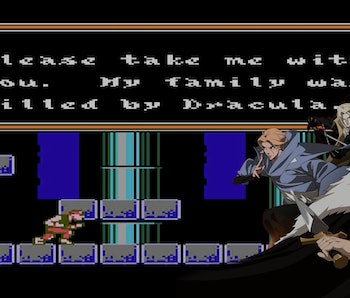 The four-episode first season of Netflix’s Castlevania served in many ways as a prologue for even more epic vampire-slaying to come. The premiere introduces us to Dracula, and the next three episodes add the heroes Trevor Belmont, Sypha Belnades, and Alucard into the mix. All three of the protagonists were player characters in the video game Castlevania III: Dracula’s Curse. But, there was a fourth player character who is nowhere to be found in the anime: the wall-climbing pirate Grant Dynasty.

In the 1989 NES game, Grant was a thief who attempted to overthrow Dracula with a band of rebels after the vampire killed his family. He was unsuccessful, and Dracula transformed him into a demon tasked with guarding part of his castle. Eventually, Trevor Belmont came across the demon Grant while fighting his way through the castle. Upon being defeated, the demon turned back into Grant, who joined Trevor and his partners to take down Dracula and free Wallachia from his reign of terror.

Grant in the game is described as “the most agile man in Wallachia,” and he plays differently from the other characters. He’s not especially strong, but he can climb on walls and ceilings, traversing his way through the labyrinth-like castle and peppering enemies with daggers and axes.

If Grant ends up appearing on the show, it would make sense that Trevor didn’t encounter him over the course of Season 1, as he never even stepped foot inside the castle where Grant’s demon form resided. Will we see Grant in the future, though? Castlevania executive producer Adi Shankar would not say one way or another. Shankar, who spoke to Inverse after the series hit Netflix, loves to talk about Castlevania, but he’s an iron trap when it comes to spoilers.

“I can’t spoil it, because it’s … I’m getting into major spoiler territory,” he said. “You’ll just have to wait and see. I can’t even get into it, because it will become a thing, yeah.”

Season 1 of Castlevania is currently streaming on Netflix. An eight-episode Season 2 is slated to premiere sometime in 2018. Maybe — maybe — we’ll see Grant then.

See Also: The Plan for Castlevania Season 2 Is Already in Motion