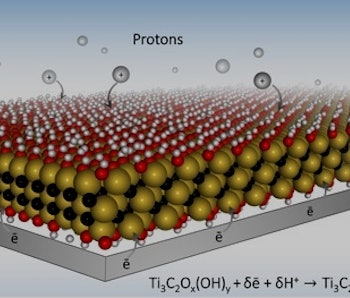 Elon Musk said it best: Existing battery technology sucks. But actually making better batteries has, for years, proved nearly impossible, due to a host of challenges around design and material science.

But researchers at Drexel University’s College of Engineering say they may have develop the solution. In a study published Monday in the journal Nature Energy, the team unveiled a new battery design based on conductive electrodes that will allow batteries to charge much faster.

“This paper refutes the widely accepted dogma that chemical charge storage, used in batteries and pseudocapacitors, is always much slower than physical storage used in electrical double-layer capacitors, also known as supercapacitors,” Yury Gogotsi, a professor in Drexel’s College of Engineering, said. “We demonstrate charging of thin MXene electrodes in tens of milliseconds. This is enabled by very high electronic conductivity of MXene. This paves the way to development of ultrafast energy storage devices than can be charged and discharged within seconds, but store much more energy than conventional supercapacitors.”

Right now, most batteries use chemical energy storage. But the Drexel-designed batteries take a different and more solid approach. In their new battery, the engineers designed thin electrodes made of a conductive material called MXenes. They riddled the MXenes — a class of two-dimensional compounds — with holes until it looked like microscopic Swiss cheese. Then, they lathered the battery up with a hydrogel designed to create more so-called “redox active sites” — ports to store energy — in the battery.

When the battery was turned on, the hydrogel stimulated more redox active sites, which are what hold on to the electric charge in a battery. At the same time, the holes in the MXenes allowed more ions to make their way to those redox active sites. While it may sound complicated, the researchers were able to create a simple, potent result: Their battery charged in seconds.

This doesn’t mean bad batteries are a thing of the past, but Drexel’s work looks promising. The battery is a prototype — and it’s unclear how long it lasts or how it works when it’s built up to the size necessary for powering a vehicle. But if this battery’s potential meets desperate phone and vehicle manufacturer’s cold hard cash, this new battery could be powering your life quite soon.