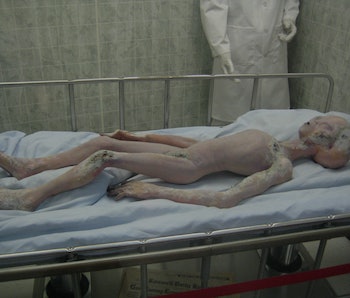 During her campaign for president, Hillary Clinton jokingly commented she would “get to the bottom” of any government cover-up about aliens, specifically, the Roswell UFO Incident.

“I would like us to go into those files and hopefully make as much of that public as possible,” Clinton told Jimmy Kimmel in 2016.

Saturday marked the 70th anniversary of the so-called Roswell UFO incident, and it’s irresistible to wonder what might have been. Even if Hillary Clinton was using jokes about alien investigations as sarcastic deflection during public question-and-answer sessions, people who believe the American government covered up a UFO crash won’t go away.

Imagine, if a president could one day open the records that uncover the truth behind the most prevalent of conspiracy theories: that a UFO crashed in Roswell, New Mexico in 1947, and the government has been covering it up ever since.

It would satisfy believers who visit the the International UFO Museum & Research Center in Roswell, New Mexico each year to see movie prop alien corpses on display. One of those believers has worked in the White House:

Whatever landed in the desert in New Mexico that day — a weather balloon or UFO — spurred interest decades later, starting in the late ‘70s through today. People at the highest levels of politics in America are among the believers. Enter John Podesta.

Most recently serving as Hillary Clinton’s campaign chair, Podesta has long been an alien enthusiast. The Washington Post reports of a 1998 interview with then-Press Secretary Mike McCurry about Podesta, who also worked in the administration of Bill Clinton: “John can get totally maniacal and phobic on certain subjects,” McCurry said. “He’s been known to pick up the phone to call the Air Force and ask them what’s going on in Area 51.”

Podesta, who also worked for the Obama administration, recounted that one of his biggest failures in the White House had been that he hadn’t “secured the disclosure of UFO files.” It leads one to believe that had Clinton won the presidency, Podesta would have been pretty serious about steering the administration into disclosing once and for all if the government had further knowledge on UFOs that they’ve been withholding from the public.

Although President Donald Trump is all about conspiracies — from the media’s attacks on his character, to how many people actually attended his inauguration ceremony. When it comes to UFOs, however, we haven’t heard much. He did sign an executive order in late June to bring back the National Space Council. Wrapping up the executive order signing, he offered his own viewpoints on America’s venture into space, or something.

While it is a stretch to think Trump is covering anything up with his infinite use of the word infinity, or his lack of interest in UFOs thus far into his tenure, he’s far from the only president to remain tight-lipped on the subject. On an episode of Jimmy Kimmel Live in March, George W. Bush refused to go on record about whether or not he had seen any secret UFO documents, or whether any existed at all, coyly saying, “I’m not telling you nothing.”

And although we know that Podesta is a firm believer, it had no effect on Barack Obama, who also remained mum on the subject throughout his time in office. He’s only joked, “I think I just became the first President to ever publicly mention Area 51,” back in 2013 during a Kennedy Center Honors speech about actress Shirley MacLaine, a firm believer in aliens.

So while it seems that presidents are content to dismiss the idea of a government cover-up, the most thoughtful comments about alien life have come from a president, too. President Ronald Reagan, in 1987:

“I occasionally think how quickly our differences worldwide would vanish if we were facing an alien threat from outside this world,” Reagan said in an address to the United Nations.