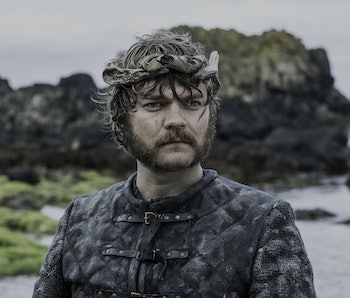 Theon and Yara’s uncle, Euron Greyjoy, arrived with a bang during Game of Thrones’s sixth season, killing their father and seizing control of the Iron Islands in one fell swoop. In Season 7, he’ll continue his power grab — but he’ll have a whole new look.

On Friday, Pilou Asbæk, who plays Euron, told Entertainment Weekly about the difference between his character and the late Ramsay Bolton. “Ramsay was a great character and to me was 100 percent evil. I think Euron is not,” he said. “I’m more like a hooligan. The guy you met at the Kingsmoot is not the guy you will meet on his ship — he’s different with different people to get what he wants.”

Previously, Asbæk said Euron will give Ramsay a run for his money in the villain department in Season 7.

EW also reported that he’ll have a different look in the upcoming episodes, to signify that this is not the same guy you met at the Kingsmoot.

That guy bragged about his dick and dramatically proclaimed, “I am the storm, the first and the last.” He had the shaggy hair and beard of a standard warrior-type in the world of Game of Thrones, rather resembling Michiel Huisman’s Daario Naharis.

But with his new makeover — which HBO hasn’t released any official press photos of — he will reportedly have a “sexier close-cropped style” and black robes.

Of course, the black robes will come in handy if he intends to woo Queen Cersei, who has revealed a penchant for sleek, villainous black. In fact, pretty much every character is wearing black in the seventh season.

And, although there aren’t any official photos of his new look, here’s a screenshot from the trailer of Euron attacking his niece and nephew, Yara and Theon. His cropped hair is on full display.

HBO perhaps didn’t consider that All Men Must Screenshot.