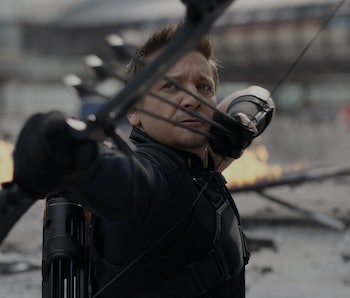 Correction: An earlier version of this story based on initial reports claimed Renner broke his arm on the set of Infinity War, not the upcoming comedy Tag. This article has been updated accordingly.

Never doubt Jeremy Renner’s commitment to Hawkeye. This week, while speaking at the Karlovy Vary Film Festival in the Czech Republic, the actor revealed that he fractured his right elbow and left wrist while filming stunts on an upcoming movie, though he’ll be back in action to play the archer hero in Avengers: Infinity War, which is slated for release next May.

At a panel for Taylor Sheridan’s thriller Wind River, in which Renner co-stars with fellow Avengers actress Elizabeth Olsen, Renner said he injured himself while shooting scenes for Tag, an ensemble comedy from director Jeff Tomsic. “That’s how it goes,” Renner said during the panel. “It’s part of the job.”

Renner then added that he can navigate through the pain, as well as doing everything he can to heal quickly. “I’m sort of a problem solver, you know. There will be an effect to it, but it won’t stop me from doing things that I need to be doing … I’ll heal fast. I’m doing everything I can to heal faster.”

According to a 2013 article published in the Wall Street Journal, Tag follows a group of adult friends engaged in a country-wide game of tag. Renner said he’s “doing a job that isn’t really requiring a ton of stunts” and that “it’s not an action movie; it’s a comedy. It just happens to have a few stunts in it.” One of those stunts, apparently, got him injured.

“So I don’t have to beat a whole lot of people up or do anything crazy,” Renner added. “So it won’t really affect my job. It affects how I get dressed in the morning. I can’t tie my shoes, but outside of that and everything else, I can kind of get by.”