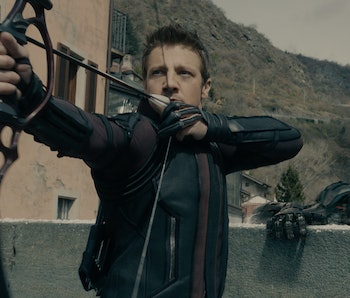 In the expansive Marvel Universe, there are gods who become superheroes and superheroes who become gods. There are mutants, monsters, assassins, super soldiers, viking princes, ninjas and six-thousand-pound ogres, magical sorcerers, and ex-Soviet assassins. And there’s Hawkeye, who is none of those things.

Which begs the question: how the fuck is Hawkeye not dead yet?

More specifically, in the Marvel Cinematic Universe — and we’re talking movies, so you can put down those Matt Fraction books — how is Hawkeye, a Jason Bourne cosplayer with a bow and arrow, still alive after Chitauri invasions and Ultron’s uprising? Sure, movies require a suspension of disbelief, but this is downright madness.

Take Avengers: Age of Ultron. In the opening battle against the last HYDRA hideout, there are many times when Hawkeye should have eaten it. Quicksilver, if he was smart instead of arrogant, should have made quick work of Hawkeye… but instead shoved him to the ground like a middle school bully. Real convenient.

Right after that, a HYDRA dude shoots him! He conveniently connects with Hawkeye bow, but a foot closer and Hawkeye would have gotten a bunch of lead in his guts.

Then there’s the action Civil War. You saw it, right? Hawkeye actually goes up against Vision, a synthetic powered by the cosmic power of the Mind Stone, which actually manipulated Hawkeye in the first Avengers? He should have had the air choked out of his larynx and the life squeezed out of him… until Scarlet Witch intervened. Perhaps Vision wouldn’t have killed Barton, but he did fuck up War Machine, so there’s no reason to think he wouldn’t have choked out Barton if given the chance.

Maybe we let this happen. Archers are a popular archetype in superhero fiction, but their origins predate Marvel and DC. English folklore hero Robin Hood, an outlaw with a heart of gold, romanticized archery as a vigilante martial art — even though his devil-may-care swagger, not his bullseye, was his real attribute. Centuries later in 1941, Mort Weisingerin and George Papp created the Green Arrow for the publisher that would eventually become DC Comics. Oliver Queen was, obviously, inspired by Robin Hood and James W. Horne’s 1940 film The Green Archer. And it was cool.

The gritty, modern Arrow on the CW has settled archery as a superpower: Oliver Queen uses it against powerless thugs and criminals — a quiet, sneaky bullseye trumps a hastily fired firearm. In fights against Ra’s Al Ghul and Damien Darhk, however, he has to resort to means beyond skinny, limited range projectiles.

So what the hell is Hawkeye doing? The guy actually aims his bow and arrow at Thor and Vision, under some insane notion that even a direct hit could take them down. He’s got other weapons too though, like… a nightstick. And some staff thing. Not, you know, shotguns or katanas, like Arrow. Sure, he acknowledged it in Age of Ultron, but that doesn’t change that he’s still using a goddamn bow and arrow.

There are few duds from the bulletproof Marvel Studios, which is demolishing the competition with Captain America: Civil War. But perhaps the most underdeveloped element of the films is Hawkeye’s fighting skills. He doesn’t have any superhuman skills, just dope aim with 15th century weaponry that soldiers dropped as soon as gunpowder became available. How does it work against Viking-wielding Thor, or Loki, or even Black Panther, a tactical genius king in impenetrable armor? At least Green Arrow knows when to fire an arrow (kinda).

Why can’t Hawkeye try something else? And what’s he going to do in Avengers: Infinity War? Sing Thanos to death?