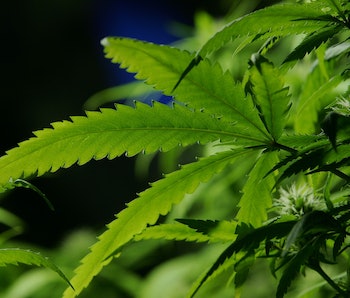 Wouldn’t you like to get high without worrying about any of the potential negative side effects, like anxiety or forgetfulness? Scientists are working on making that beautiful concept a reality. Recent research on the brain’s cannabinoid receptors published in the journal Nature may help us chemically recreate just the best parts of weed.

Human bodies contain hundreds of kinds of cell membrane receptors — i.e. protein molecules that change the function of a cell in response to external stimuli — of which one type is the cannabinoid receptor 1 (CB1), which gets us high. CB1 was this new research’s object of study.

Any compound that activates CB1 is called a “cannabinoid”; THC is the best-known example. Our body actually makes some cannabinoids, too, called “endocannabinoids,” which aid in regulating our sleep, mood, digestion, immune system, and loads of other important things.

Until now, scientists have assumed that CB1 reacted to every cannabinoid in the same way. But a team at Northeastern University’s Center for Drug Discovery discovered that the receptor actually responds differently to different compounds; they saw CB1 changing size and its amino acid helices taking on new shapes when a fresh type of cannabinoid was applied.

Alexandros Makriyannis, co-author of the research, thinks these results indicate that scientists will eventually be able to create a synthetic cannabinoid that triggers just certain effects of weed. All the elation, minus the nervousness, maybe; all the pain relief, minus the hunger.

Of course, if this happens, the specialized synthetic weed will initially be made for medical purposes. As the study concludes: “These findings should inspire the design of chemically diverse ligands with distinct pharmacological properties.”

Makriyannis put that more simply for WIRED: “We want to make compounds that will modify the receptor differently, so we can make better drugs,” he said.

More like this
Science
6.23.2022 6:44 PM
Scientists discovered the biggest bacteria ever, and it’s the size of an eyelash
By Allison Parshall
Science
6.28.2022 10:00 AM
How are drugs absorbed in the body? The science of medicine, explained
By Tom Anchordoquy and The Conversation
Science
6.27.2022 11:00 AM
Letting your cat go outside could spread “life-threatening” parasites — new research
By Amy Wilson, Scott Wilson and The Conversation
Related Tags
Share: