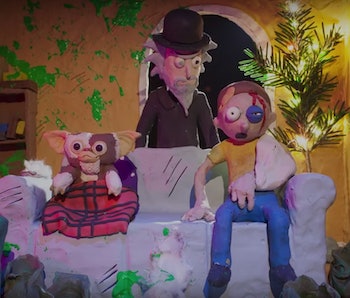 No classic horror or sci-fi movie is safe from a Rick and Morty parody, not even the vicious Gremlins or 2001: A Space Odyssey. The latest Rick and Morty shorts released in the wake of June 29’s Season 3 trailer release live stream parody both films, while also mixing in a live-action recreation of a scene from the show. They say these adventures are “non-canonical”, but in an infinite multiverse, they might as well be, right?

Rick and Morty has famously debuted a number of short videos in the long hiatus between its second and third seasons. Claymation animator Lee Hardcastle previously riffed on The Thing, Honey I Shrunk the Kids, Ex Machina, and The Fly in similar shorts. There was also a series of similarly styled shorts featuring puppets by Cat Solen that released in April after the surprise Season 3 premiere episode aired.

In “Space Odyssey,” subtitled “Pod Bay Doors,” Morty pleads with Rick to open the pod bay doors aboard some kind of space station. Morty appears in some kind of orange space suit, and only Rick’s voice is heard.

It’s an obvious riff on the iconic scene from 2001: A Space Odyssey as Dave tries to get the A.I. called HAL to open the pod bay doors. HAL turns malicious, and the story becomes a battle between man and machine. In the case of Rick and Morty, it’s a nervously bumbling grandson and his A.I. grandfather.

For the “Gremlins” short, a battered Morty with his arm in a sling sits watching TV at the couch with Gizmo. Rick bursts in dressed as Mr. Wing, the Chinese shopkeeper that originally owned Gizmo, the famed Mogwai.

It’s basically a remake of Gremlins’ final scene. After battling Stripe and a horde of Gremlins throughout the movie, Gizmo and an injured Billy collapse on a couch. Before long, Mr. Wing takes Gizmo away and scolds Billy for his carelessness while giving him a refund (that’s the paper that Morty-Billy scoops up).

Also included as part of the new shorts is a live-action version of the Eye Hole Man cereal advertisement that appears during “Interdimensional Cable 2: Tempting Fate,” in which the family takes an incredibly ill Jerry to a special hospital in space. This promo originally appeared at the start of the Rick and Morty live stream event on June 29 that included the Season 3 trailer release.

Eyeholes are, apparently, a delicious cereal — but they’re also the organ through which some humanoid aliens in the multiverse use to engage in foreplay.

The full original animated scene opens with the couple confessing that they each have eyeholes before sucking face in the most grotesque way that nobody ever wanted to see. In both versions, Eyeholes Man bursts in through the ceiling and assaults the couple, because he’s “the only one allowed to have eyeholes!”

Be sure to watch the very end, when he munches on one after kicking it out of the people’s faces.