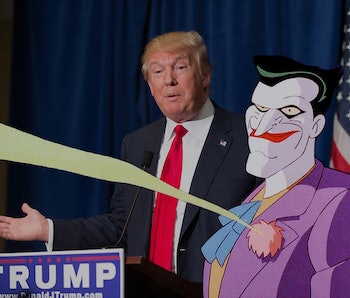 In recent DC Comics, the Joker’s had his face ripped off, and he stapled the decaying husk of flesh to his raw skull. On Thursday morning, President Donald Trump tweeted about Morning Joe co-host Mika Brzezinski, criticizing her intelligence and claiming that she was “bleeding badly from a face-lift.” So there was perhaps no better time for Mark Hamill, who lent his voice to the Clown Prince of Crime for Batman: The Animated Series, to read @ReadDonaldTrump’s tweets in the crazy, iconic voice of his Joker.

“I heard poorly rated Morning Joe speaks badly of me heheh (don’t watch anymore),” Hamill says in an audio file shared to audioBoom, his voice dripping with off-kilter malice. “Then how come low I.Q. Craaaaazzy Mika, along with Psycho Joe, came to Mar-a-Lago 3 nights in a row around New Year’s Eve, and insisted on joining me!? She was bleeding badly from a face-lift ah hah hah hah! I said no!”

Trump’s nakedly sexist tweets — which have been met with outrage on both sides of the isle (though most of the Republican objections have been pretty tepid) — came shortly before that day’s episode of Morning Joe wrapped up. I’m not the World’s Greatest Detective or anything, but it seems like there was something on the show (a show that Trump claims he doesn’t watch) that the president didn’t like.

It’s not the first time that Hamill has had an unsettlingly easy time mining Trump’s tweets for Joker material. In early January, he tackled Trump’s New Year’s tweet. Then, later that month, he voice acted Trump’s half of his feud with actress Meryl Streep following her comments lambasting him at the Golden Globes.

Where’s Batman when you need him?