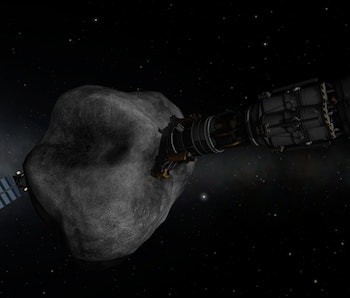 There’s no question asteroid mining could one day become a booming part of the global economy. (In fact at that point, might it be appropriate to start saying galactic economy?) But exactly how much money are we talking about? And when can we expect the dough to start rolling in?

Those will most certainly be part of the myriad of questions being tossed around during International Asteroid Day 2017 on June 30. And while the focus of Asteroid Day is to talk about the existential threats these rocks pose to Earth, people are anxious to talk about what asteroids might do for society. What value are they to the human species?

Well, according to Goldman Sachs, we’re talking trillions (plural!) of dollars, and potentially by 2020. A recently published 98-page report issued by the financial firm to its clients suggests a single asteroid could possess as much as $50 billion in valuable and rare resources, like platinum, Business Insider reported.

Of course, getting to those rocks is astronomically much easier said than done. But the report argues against the perception that it’s impossible. “While the psychological barrier to mining asteroids is high,” Goldman Sachs analyst Noah Popnak writes, “the actual financial and technological barriers are far lower. Prospecting probes can likely be built for tens of millions of dollars each and Caltech has suggested an asteroid-grabbing spacecraft could cost $2.6 [billion].”

And surely, the returns would more than make up for the initial costs. Popnak goes on to mention that according to a 2012 Reuters interview with space mining company Planetary Resources, “a single asteroid the size of a football field could contain $25 [billion] - $50 [billion] worth of platinum.”

The report also makes a case for other resources beside precious metals. Water, for instance, has been consistently touted as a potential source of rocket fuel for spacecraft moving to places far beyond Earth. Asteroids and other bodies containing large amounts of ice could, to some extent, could serve as refueling stations in space and help lower the costs of spaceflight across the board.

If the last few years are any indication, the spaceflight industry and its partners is certainly gearing up for a very lucrative future. Already, countries like the U.S. and Luxembourg are laying down the legal framework to allow companies and private parties to lay claim to what they find on celestial bodies strewing around space.

What exactly are the odds of finding an asteroid worth billions of dollars? Well, not great. There is only one metallic asteroid that astronomers have identified and are tracking — Psyche, which NASA plans to study in a mission that launches in 2022. Psyche, in any case, is thought to be made of nickel-iron metal — not platinum.

Of course, we know that other asteroids like Psyche exist, and NASA and the rest of the space community is eager to study Psyche precisely to understand more about how these types of asteroids form, and how we can better identify and track other metallic buggers in the solar system.

But what about that 2020 date? Is it really conceivable that we might stumble on an asteroid worth more money than multiple Elon Musks? Probably not, but maybe soon afterward! The first commercial mission to investigate the potential of asteroid mining is launching in 2020, by Deep Space Industries. The company has yet to select a near Earth asteroid to head to, but that rock could very well possess something worth a lot of money, even if its not a goddamn football field worth of platinum.

There is, however, one major reason to caution against stumbling upon Treasure Asteroid: the cratering of a market. Literally! “Successful asteroid mining would likely crater the global price of platinum,” the Goldman Sachs report states, “with a single 500-meter-wide asteroid containing nearly 175 [times] the global output, according to MIT’s Mission 2016.”

So perhaps we should be a tad more cautious about what to do in case we find the most valuable rock in the known universe. Still, the search is on. Finders keepers, losers weepers.

More like this
Innovation
Jan. 25, 2023
Starship orbital flight: SpaceX successfully loaded the rocket with over 10 million pounds of propellant
By Mike Brown and Molly Glick
Science
Feb. 6, 2023
How the Webb Telescope is Rewriting What We Know About the Early Universe, One Galaxy at a Time
By Doris Elín Urrutia
Science
Jan. 31, 2023
NASA Finds the Culprit Behind a Webb Telescope Malfunction: Powerful Cosmic Rays
By Doris Elín Urrutia
LEARN SOMETHING NEW EVERY DAY.
Share: