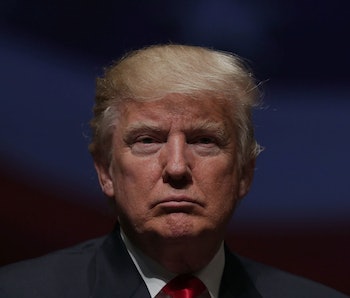 President Donald Trump was handed a small but meaningful victory in the Supreme Court on Monday when the Court decided to allow his travel ban against certain Muslim majority countries to go into effect on a partial basis. It will remain that way until the Supreme Court hears arguments for the case in October.

In an unsigned opinion, the nine justices decided not to — as most lower courts have done — put a full stop on the ban until the case is fully litigated, instead deciding to allow the ban to move forward with some major caveats:

“[The ban] may not be enforced against foreign nationals who have a credible claim of a bona fide relationship with a person or entity in the United States.”

The exception was designed to avoid the tumult of previous implementations of the ban wherein people coming from the targeted countries were unable to be reconnected with family members, loved ones, or their jobs because of the ban.

While still a far cry from a full stay, the exception will likely ensure that far fewer people will be affected by the ban than would have been otherwise. The exception does still, however, allow for the stoppage of refugees or others who are trying to immigrate but who don’t have prior roots in or connections to the U.S. It also leaves unclear the fate of individuals who have ties to the U.S. that do not involve something so concrete as familial ties. Students and scientists, for example, fall into this category. While they will probably be covered by the exemption, it’s likely that cases will emerge soon in lower courts as people begin to try and define what a “bona fide relationship” actually means.

The high court’s opinion was likely the result of a compromise between the moderate conservatives and liberal justices on the Supreme Court. The Washington Post reports that Justices Clarence Thomas, Samuel Alito, and Neil Gorsuch would have let the ban go into effect as written, which means that Chief Justice John Roberts and Justice Anthony Kennedy sided with Ruth Bader Ginsburg, Elena Kagan, Sonia Sotomayor, and Stephen Breyer on the unsigned opinion. Such a compromise was perhaps the only way the four liberal justices were able to win over Roberts and Kennedy.

The opinion also noted that the entire case might be over and done with by the time the court hears it in October. The stated purpose of the ban (slated to function for 90 days for immigrants and 120 days for refugees) was to allow time for the U.S.’s vetting protocols to be improved.

As of Monday, it has been 150 days since Trump signed the original ban. No changes to vetting policies have been publicly proposed or implemented. In an apparent rebuke of that sluggishness, the court indicated that it expected the administration to comply with its own time frame going forward, and that the clock has officially started.

Read the full opinion on supremecourt.gov.